This has to be one of the odder side effects of the normalization of diplomatic relations between the US and China in 1979:

In the middle of all this, to set the seal on new-found friendship, in early February 1979 China’s supreme leader went off on his famous trip to the United States. Screened without commentary to an astounded television audience back home, the diminutive Deng Xiaoping was paraded nightly schmoozing with his new friend Jimmy Carter and assorted U.S. moneybags. Here he was at Simonton, Texas, at a rodeo, buried under a ten-gallon Stetson. There he was, taking tea and sandwiches in the palatial ranch-house style villa of a ‘typical’ American worker.

And this was the week, too, that our local cinema, and no doubt every movie-house in the nation, chose to screen Yul Brunner in Westworld.

Westworld’s story line has leading world statesmen invited to a subterranean lair in a Nevada desert crawling with rattlesnakes. Once there, their brains and organs are dismantled, to be replaced by robotic parts. Heads and bodies are then sewn up to create an end result indistinguishable from the human original. The robot ‘leaders’ are then despatched to their respective countries where they must do the bidding of an evil West World clique bent on ruling the universe.

This daft performance over, as we trooped down the concrete spittle-covered stairs of the cinema, I was all ears for audience reaction. Almost echoing my thoughts, though more literally, an elderly farmer grabbed my coat sleeves and proclaimed loudly: ‘Probably that’s what they’ll be doing to old Deng.’

That is from Richard Kirkby, Intruder in Mao’s Realm: An Englishman’s Eyewitness Account of 1970s China; the author was teaching English in Shandong province at the time. 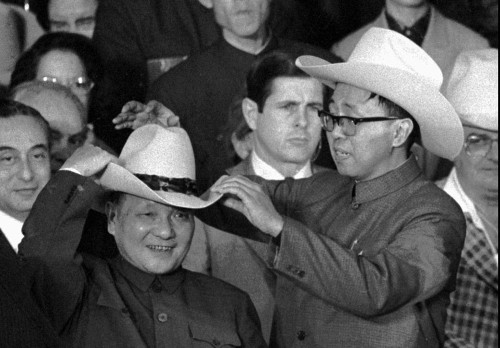