The deterioration of US-Russia relations, and Russia’s shift to increasingly repressive domestic politics and an increasingly aggressive external stance, is one of the most important shifts in global politics over the past couple of decades. One of the standard explanations for this worrying trend is that it is Russia’s natural reaction to what it could only perceive as aggression by the West: the expansion of NATO up to Russian borders. Indeed, just such an outcome was predicted by many Russia hands when NATO expansion was first proposed. Here is George F. Kennan’s famous 1997 op-ed in the New York Times:

And perhaps it is not too late to advance a view that, I believe, is not only mine alone but is shared by a number of others with extensive and in most instances more recent experience in Russian matters. The view, bluntly stated, is that expanding NATO would be the most fateful error of American policy in the entire post-cold-war era.

Such a decision may be expected to inflame the nationalistic, anti-Western and militaristic tendencies in Russian opinion; to have an adverse effect on the development of Russian democracy; to restore the atmosphere of the cold war to East-West relations, and to impel Russian foreign policy in directions decidedly not to our liking. 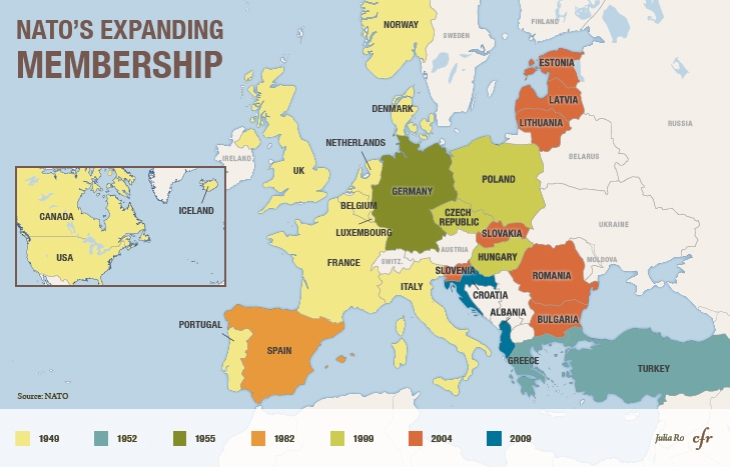 The new “Russia Beyond Putin” issue of Daedalus (available on Kindle) has an interesting piece by Keith A. Darden, “Russian Revanche: External Threats & Regime Reactions,” which suggests a slightly different narrative. Rather than NATO expansion per se, he argues, it was NATO’s shift to a doctrine of external intervention that catalyzed Russia’s fears:

NATO expansion – which began in the mid-1990s – was not well received in Russia, but NATO expansion alone appears to have been insufficient to raise the specter of a threat to Russia’s territorial integrity. Russia’s security doctrine in 1997, which followed the invitation of Poland, Hungary, and the Czech Republic to join the NATO alliance, did not explicitly identify NATO or the United States in the list of threats Russia faced. Indeed, external military threats hardly merited mention.

This changed with Kosovo. The NATO bombing of Yugoslavia in 1999 shifted perceptions completely: it showed that the alliance could (and would) be used for offensive out-of-area operations to intervene in the internal affairs of a sovereign state without United Nations approval. Russian leaders immediately registered the potential threat. The link of external (U.S./NATO) military power with internal opposition (the Kosovo Liberation Army) to undermine a rival government came to be perceived as a new model of warfare and the “foundation of a unipolar world.”

In Russia’s October 1999 National Security Concept – the first following the Kosovo War – international influence in Russia’s internal politics was identified as a threat to national security. An expansion of the domestic control of the state was articulated as strategically necessary to prevent external actors from undermining Russia’s internal security. In a world of asymmetric Western power, the notion that a state’s internal opposition could be exploited by outside powers to undermine a regime created a perverse incentive for some regimes to circumscribe or eliminate the internal pluralism essential to democratic rule. …

The extra-constitutional ouster of Viktor Yanukovych’s government [in Ukraine] and the seizure of power by a pro-U.S., pro-NATO, and anti-Russian coalition clearly marked a sharp increase in the perception of threat in Moscow, triggering a full triad of balancing efforts (military, internal, and ideological). As a military response, Russia used its newly revamped special forces to quickly invade and annex Crimea and to sustain a separatist insurgency in eastern Ukraine. By May 2014, the Russian security doctrine identified color revolutions as a form of hybrid warfare used by the United States as the primary external threat.

If Russia’s anti-Western reaction is not a uniquely Russian phenomenon, but instead an instance of a more general trend, then this interpretation makes sense. Only Russia was threatened by the expansion of NATO. But many countries could reasonably feel threatened by the West’s new willingness to overthrow governments it dislikes.

Darden suggests that China has followed a similar trajectory for similar reasons. And indeed it is true that China’s government perceived the “color revolutions” of the early 2000s in much the same way as Russia did, as “organizational pro-Western proxies used by the U.S. to oust unfriendly leaders.” The broader conclusion is not very cheerful:

To place the Russian reaction in broader context it is useful to recall historian and diplomat E. H. Carr, who pointed to the relations of power that underlay normative commitments in international affairs. Writing in the 1930s, but looking back at the ideologies of predominant states, Carr noted that internationalism and universalism were ideologies of states that aspired to world leadership – to hegemony. Universal values suit the powerful, Carr thought, for they justify universal intervention and interference in the internal affairs of other states, something only the powerful are capable of. “Pleas for international solidarity and world union,” Carr wrote, “come from those dominant nations which may hope to exercise control over a unified world.”

Similarly, Carr noted that the ideological reaction of rising powers was a function of positions of relative weakness. “Countries which are struggling to force their way into the dominant group naturally tend to invoke nationalism against the internationalism of the controlling powers.” Universalism, whether liberal or communist, is the ideology of the dominant. The aspiring or declining powers mobilize nationalism and particularism.

In the antiliberalism of great powers like Russia and China, we see the paradoxical effect of the singularity of American power and dominance: a defensive inversion of dominant norms. For states strong enough to mount a challenge, and with a prior history of framing internal pluralism as a source of external threat, resistance to U.S. power will present as an antiliberalism that is likely to shape domestic institutions. It is depressing that the primary effect of a world dominated by liberal democratic states may not be the gradual extension of democracy and the normative assimilation of the world’s nondemocratic emerging powers, but it should not come as a surprise. The primary effect of muscular liberalism may be to generate an opposing reaction.