I can no longer recall what pointed me toward Anton Chekhov’s Sakhalin Island, but it is definitely one of my better literary discoveries in a while. In it we see a writer best known for short fiction undertaking a huge piece of nonfiction: a comprehensive account of the penal colony on Sakhalin in 1890, combining travel writing and character sketches with policy analysis and, perhaps most surprisingly, the presentation of vast quantities of data.

Here is some background on what prompted Chekhov’s investigation, which seemed just as out of character to his contemporaries as it does it to us; from the notes to this edition:

At the end of 1889, unexpectedly, and for no apparent reason, the twenty-nine year-old author announced his intention to leave European Russia, and to travel across Siberia to Sakhalin, the large island separating Siberia and the Pacific Ocean, following which he would write a full-scale examination of the penal colony maintained there by the Tsarist authorities. …

Sakhalin, since it was an island, and as far away from central Russia as one could go without leaving the country, was used at the time exclusively as a destination for long-term hard-labour convicts, who – apart from those on life terms – would serve out their sentences, then proceed to live in a local village to serve for several years with the status of a felon who was rehabilitating himself by learning to live a productive life in the community. Finally, when this period of “probation” was over, he or she would have their free-person’s rights restored to them and could leave for the mainland – but were still not allowed back to central Russia; they had to remain in Siberia for life. The authorities hoped by this policy to turn Sakhalin into a thriving colony on the lines of Australia, and numerous dishonest reports appeared in the European Russian press, planted by the government, claiming that this aim was being achieved.

There is a an argumentative core to the book, which is to show that the idea of using prison labor to develop a colony is a hopeless contradiction. The fundamental reason for this is that building up a successful economy and society in a colony requires individual initiative and responsibility, which is what a prison exists to destroy:

A prison is antagonistic to a colony, and their interests are in inverse ratio to each other. Life in the communal cells reduces a prisoner to the condition of a serf, and in the course of time, makes him degenerate; the habits of the life of the herd stifle within him the instincts of a permanently settled man and domesticated householder; his health declines, he grows old and weakens morally, and the later he leaves the prison the more reasons there are to fear that he will not turn out an active, useful member of the colony, but merely a burden to it.

A related theme is that in any competition between exile or convict labor and free labor, free labor always wins, because they do a better job. And therefore that the government idea behind the colony–that forced exile can be an effective economic development program–is fatally flawed. (Of course, this did not prevent the Soviet government from attempting the same thing on a much vaster scale with the Gulag system in the twentieth century.) In this passage Chekhov thinks through what the rational economic development of Sakhalin might look like, and concludes that the penal colony would inevitably wither away:

The major wealth of Sakhalin, and its – possibly enviable and happy – future, lies not, as people think, in fur-bearing animals but in the seasonal fish. … For fishing to take on the significance of a serious industry, the colony should be moved closer to the mouth of the Tym or the Poronai. But this is not the only prerequisite. It is also necessary that free individuals should not compete with the exile population, since there is no type of business in which, where there is a clash of interests, the free would not gain the upper hand over the exiles.

However, the exiles are in competition with the Japanese, who either conduct their fishing in a contraband fashion or else pay duty, and with the officials, who take possession of the best spots for the prison fisheries, and the time is already approaching when, with the construction of the Siberian railway and the development of shipping, rumours of the fabulous wealth of fish and fur-bearing animals will attract the free to the island; immigration will commence, genuine fisheries will be set up, in which the exile will take part not as a proprietor-businessman but merely as a hired hand, and then, judging from similar situations in the past, complaints will begin that the labour of the exiles is, in many respects, inferior to the labour of the free, even to that of the Manzes and Koreans; from the economic point of view, the exile population will come to be considered a burden for the island, and, with the expansion of immigration and the development of a settled and commercial way of life on the island, the state itself will find it more just and profitable to take the side of the free element and call a halt to the process of exile. And so, fish shall constitute the prosperity of Sakhalin, but not of the exile colony.

But there are actually very few of these moments where Chekhov speaks in his own voice to editorialize or tell us what to think: his method is “show, don’t tell,” and the patient accumulation of overwhelming and often heartbreaking detail. As part of his three-month investigation, Chekhov made his own census of the exile population, conducting brief interviews with every household he could find. This provided him with a wealth not only of impressions and anecdotes, but also data. Here is one of the more quantitative passages to give a taste of this aspect of the book:

If one were to draw a curve of the escapes on a graph, its highest points would relate to the summer months and to those winter months when the frosts are heaviest. Obviously, the most favourable moments for carrying out escapes are when the weather is warm, when work is being carried on outside the prison, during the seasonal fish run, when the berries are ripening in the taiga, and when the settled exiles’ potatoes are fully mature, and after these, the time when the sea is covered with ice, when Sakhalin ceases to be an island. Also conducive to the rises in the summer and winter months is the arrival of new parties on the spring and autumn voyages. Least of all abscond in March and April, because during these months the ice breaks up on the rivers, and it is impossible to obtain food either in the taiga or from settled exiles, who by the spring usually no longer have any food left themselves.

In 1889, 15.33 per cent of the average yearly complement escaped from the Alexandrovsk Prison; from the Dooay and Voyevodsk Prisons – where, besides overseers, sentries with rifles also keep guard over the prisoners – 6.4 per cent escaped in 1889, and from the prisons of the Tymovsk District, nine per cent. These figures relate only to the year under review, but if one were to take the entire available total of convicts over the whole duration of their stay on the island, the ratio of those who have run off at various times to the total complement amounts to no less than sixty per cent – that is, of every five individuals whom you see in the prison or in the streets, three, for a certainty, will have already attempted to decamp. From talks with the exiles I gained the impression they had all gone off at some stage. It is rare for anybody, during the course of his sentence, not to arrange a holiday for himself.

The comprehensiveness–geography, population, health, economy–of Chekhov’s account seems characteristically and delightfully nineteenth-century to me. It’s not a perfect book: a nonfiction writer today would use a much less schematic structure, and would try to link the chapters with more of a narrative thread than Chekhov does. But in the end it is a wonderfully vivid and detailed portrait of a particular place at a particular time, which is probably more valuable than a purely personal reflection or polemical argument. 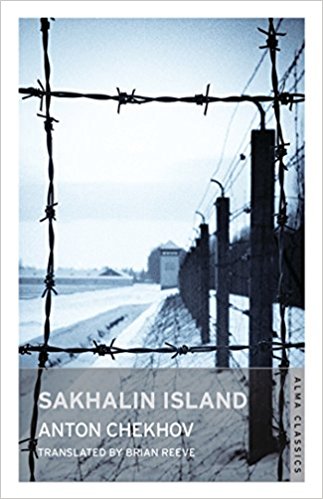 One complaint is that although the translation reads very well, it was not well-served by the publisher: in the electronic edition the notes are not linked, making them basically unusable, and in the print edition the type is too small.