As the last hints of summer warmth vanish from the Beijing air, ice cream season is coming to an end. So it seems like the right time sing the praises of Chinese ice cream, since it will be many more months before we start eating it again. For many years now, I have been the only American I know who really appreciates Chinese ice cream, but I can’t figure out why. There’s a lot to appreciate.

Chinese ice cream is different, and those differences reflect a different economic and technological context. American ice cream is mainly sold by grocery stores in large containers to be eaten at home. So the basic assumption is that people have freezers at home in which to store the ice cream. Even when ice cream is sold on-the-go, it is sold out as scoops out of those big containers. But historically in China most people did not have freezers at home, though many more of them do now. Ice cream in China is therefore usually sold by convenience stores or roadside stalls, in small packages to be eaten immediately. So rather than big vats of ice cream, it is mostly individual bars.

These constraints have pushed innovation in Chinese ice cream in different directions. You can get all kinds of amazing wacky ice cream flavors in the US, but they are all delivered in mostly the same form: a tub of ice cream eaten with a spoon. Chinese ice cream innovates on form and texture more than with ingredients, with many bars featuring not just crunchy outer layers of chocolate but interior elements made of various yummy substances.

The structural complexity of some ice-cream bars is so great that it’s common for the package to have a 3-D cutaway diagram to illustrate all the goodies on the inside. One of my favorites, whose wrapper I’ve scanned in below, is the “Qiao Le Zi” (the name is untranslateable, at least by me). Note how many layers it has: an outer layer of chocolate and nuts, a rather thin inner layer of ice cream, followed by a chunk of nutty chocolate in the middle.

The brand’s slogan, written in small characters above the logo, is xihuan ni, mei daoli which means “I like you, there’s no reason.” Yes, exactly!

In the last few years, the pendulum of popular taste in China seems to have swung away from baroque architectural complexity and toward retro simplicity and purity. The key example here is the “Dong Bei Da Ban,” which is just a rectangular block of pure milk ice cream. The name means literally means “Northeast Big Bar” and is a brand that people seem to associate with simpler times. 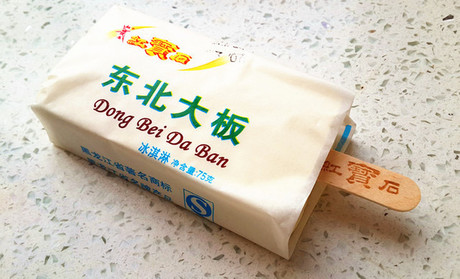 These are everywhere now, along with similar all-natural single-flavor options.The Big Bars are indeed nice but I still find myself plumping for crazy, crunchy complexity when given the choice. Sadly, the wackier ice-cream constructions are getting harder to find these days at Seven-Eleven, let alone more upscale markets. But at the newsstands and other roadside vendors you can still find many options that may not be as “authentic,” but are much more inventive.