Jane Perlez has a nice piece in the New York Times reporting on the woes of a remote coal town in Heilongjiang province. After a long time out of the media spotlight, China’s northeast is certainly getting its share of coverage lately (see previous examples here and here) thanks to its position as the epicenter of the country’s industrial slowdown.

The mine’s owner, the Longmay Group, the biggest coal company in northeastern China, announced in September that it planned to lay off 100,000 workers. The elimination of about 40 percent of the work force at 42 mines in four cities is the biggest reduction in jobs that anyone could recall in this steadily declining rust belt near the Russian border.

China has managed mass layoffs at creaky, state-owned businesses like Longmay before, averting the threat of strikes and unrest by suppressing protests and offering payouts and job training.

But that was when the economy was booming and could readily absorb displaced workers. The test the government now faces in this depressed coal town and in other hard-hit areas across the country is whether it can head off labor discontent in a slowing economy.

Longmay has so far delayed the bulk of the layoffs, cutting only several hundred older workers who held nonessential jobs. Last month, the government of Heilongjiang Province, which owns Longmay, announced a $600 million bailout that would help the company repay its bonds. But analysts see the infusion as short-term relief that will not prevent the inevitable reckoning.

The coal industry is hurting nationwide, as coal prices have fallen nearly 60 percent since 2011, said Deng Shun, an analyst at ICIS C1 Energy, a consultancy based in Shanghai. And Longmay, he said, produces far less coal with extra workers than newer, more efficient companies.

“They are quite worried about social unrest, so they delay,” he said. “These layoffs should have happened two years ago.”

The piece focuses on the potential labor market impacts of layoffs at coal mines and other troubled industries. While the coal industry has been shedding jobs over the past couple of years, mines have also tried to minimize layoffs by cutting wages and working hours. But given the catastrophic financial condition of many coal mines, it’s unclear how long these measures can be sustained. A lot of this depends on how much help local governments give, and one way to interpret the unusual public announcements of large layoffs is as a strategy for the mines to pressure the authorities for more financial support (which Longmay received, as noted above). Still, the general view that the future will hold more layoffs rather than fewer is hard to argue with. 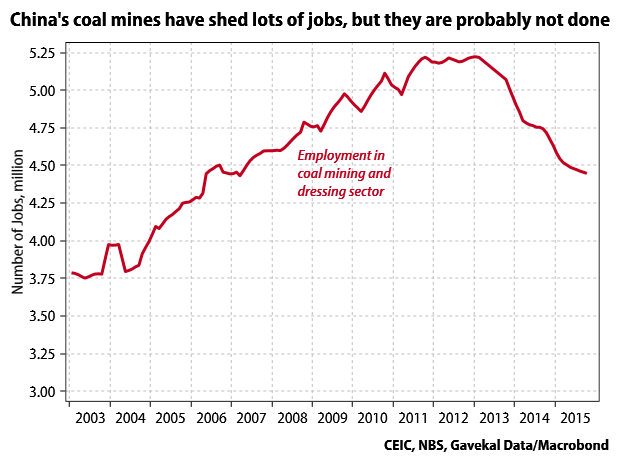 Some of the concerns about the impact of these layoffs come from what the Harvard sociologist Martin Whyte called “the myth of the social volcano” (which he attacked in a book of the same name): the idea that Chinese society is rumbling pool of discontent that will erupt as soon as they run out of the opiate of economic growth. While I do think we are going to see things get worse in China’s labor market, and that things could get very tough in places like Heilongjiang, I really don’t think the result is likely to be mass protests, endemic violence or whatever it is people mean by “social unrest.” For one thing, the informal support networks in Chinese society are much stronger in my experience than in, for instance, America (which is having its own epidemic of social unrest at the moment). For another, the country went through a much more serious round of labor market stress starting in the late 1990s, when tens of millions of people were laid off from state-owned enterprises in every sector, without experiencing mass unrest. 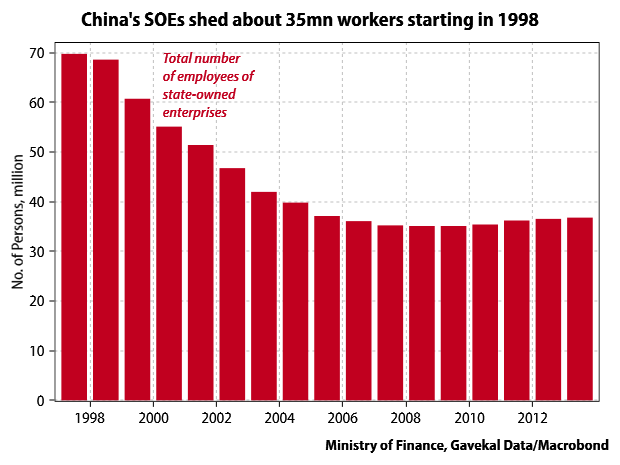