In working on my Paulson Institute paper on service-sector liberalization, I ended up putting a lot of emphasis on one seemingly minor component of the 12th five-year plan on healthcare. Among its many goals, the plan includes a target for raising the share of hospital beds in private hospitals to 20% by 2015; while the 2015 figures aren’t available yet, that share did in fact rise from 11% in 2010 to 17% in 2014 (see chart below). This seemed to me a useful example of how to use China’s planning system to drive liberalization rather than just increased output. And reading the excellent recent CSIS report on China’s 13th five-year plan, by Scott Kennedy and Chris Johnson, I find that I am not alone. The section on healthcare includes this comment from an anonymous interviewee:

One Chinese health care expert suggested that perhaps the best benchmark of whether the various reform proposals would actually transform the system would be to focus on the proportion of hospital beds that are in private hospitals. In order for that figure to rise dramatically, for example, to 60 percent, it would likely require changes in other areas of the system, including the development and marketing of drugs, the professional status of doctors, and the availability of private insurance.

So the reason to set a target for the private sector’s market share is to push people in the system to figure out all the different things that need to change in order for the target to be achieved. Rather than get bogged down in precisely specifying the means, the authorities can just specify the ends. The CSIS report puts it rather better than I originally did in my paper. This logic I think further supports the idea that these kind of targets should be more widely adopted if the Chinese government wants to ensure that its rhetoric about greater opportunities for the private sector is actually matched by reality.

The expert’s proposal for a very high and aggressive target for the private sector’s share of healthcare would certainly be controversial. As Kennedy and Johnson write, the complexity of healthcare markets makes it hard to simply argue that a much greater private-sector role would be uncomplicatedly good for everybody:

There is no consensus that a fully market-oriented health care system would yield better health care outcomes for Chinese society. Some worry that if things were made easier for foreign pharma[ceutical companies], private hospitals, doctors, and private insurers, the cost of health care would rise, and many who now are well treated would be priced out of the market. …

Would more thoroughgoing marketization serve China much better? It is hard to know for sure, given that there are both successful and failed examples of privately-based, market-oriented health care system.

On the other hand, they do note the ways in which the corruption and inequality in the Chinese healthcare system is linked to the high levels of state dominance:

China’s almost 3 million doctors have been prisoners in this state-controlled system. They are not classified as regular workers, and they are tied to their hospitals just the way SOE and government employees used to be fixed to their official work units. As a result, hospitals have gotten away with providing meager wages to their doctors of only a few thousand yuan per month. Not surprisingly, it is hard to attract promising minds to consider medicine as a profession. …Because of their terrible pay, some of those who do become doctors have been driven into corruption, taking bribes (masked as commissions or event fees) from drug companies and distributors in the hopes they press their hospitals to acquire certain drugs and encourage their patients to use them. Several sources reported that doctors also earn a large portion of their actual take-home pay from bribes from patients hoping to receive their care.

The 13th five-year plan for healthcare has not yet been published, so it will be interesting to see what happens to that private-sector target. 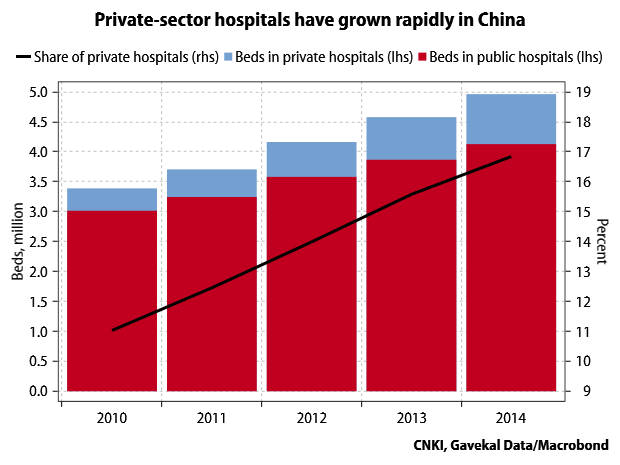