One interesting theme in recent press coverage of Russia is the revival of the popularity of Stalin, which seems to parallel the increasingly authoritarian governing strategy of Putin. Here is Alec Luhn in the New York Times:

In 2015, the Communist Party, which has 92 of 450 seats in Parliament and often toes the Kremlin line, raised a banner with pictures of Lenin and Stalin as the backdrop for the party plenary session. At Victory Day celebrations last May 9, his image adorned a fence next to a Moscow police station. Moscow’s best-known bookstore was recently promoting a book called “How Stalin Defeated Corruption.” School textbooks and state television programs, even if they briefly mention his human rights abuses, celebrate Stalin as a great leader. Mr. Putin …wants to play to the masses who are growing enamored of Stalin without alienating those Russians, such as the Moscow intelligentsia, who abhor him. The president has also carefully praised Stalin: “We can criticize the commanders and Stalin all we like, but can anyone say with certainty that a different approach would have enabled us to win?” he once said about World War II. …

This quiet rehabilitation began after Vladimir V. Putin came to power in 1999. Stalin’s legacy has become a tacit justification as the Putin government has strengthened its own grip on power. Under Stalin, “order” and national prestige trumped human rights or civil liberties. “By raising the figure of Stalin, the Putin regime is trying to raise the idea that collective interests are more important than individual lives, and that means the regime has less responsibility to society,” Lev Gudkov, who conducts the Levada Center’s Stalin polls, told me.

Yet in an interesting piece at the Lowy Institute’s site, Matthew Dal Santo says that while it is tempting to think the revival of Stalin is simply an official strategy to justify Putin’s authoritarian rule, that would be a mistake:

‘It is absolutely not the case’, says [Mikhail Remizov, director of the National Strategy Institute], ‘that there’s any official programme for rehabilitating the Stalin cult from above. It’s a popular movement, driven from below, propelled by a sense of anger towards what is perceived to be a vast trahison des élites.’ Motivated by a desire to cut the country’s oligarchs down to size, popular nostalgia for Stalin offers an implicit challenge to what has from the start been a central element of Putin’s legitimacy: his claim to have ‘tamed the oligarchs’. Despite his public image, says Remizov, Putin isn’t a Vozhd (‘Leader’, a popular name for Stalin) before whom Russia’s ruling elite trembles; he’s an (imperfect) moderator of their squabbles. Official treatment of Stalin reflects the result of this impasse, neither to suppress nor promote popular support for his legacy.

But if the Kremlin isn’t trying to revive Stalinism, what is going on?

Absent from Western reports of ‘re-Stalinization’ is the evidence for a much wider shift in Russians’ views on their country’s history. Particularly striking has been the rehabilitation of the pre-revolutionary regime. The same survey that showed an increase in favourable perceptions of Stalin also revealed that since 1999 the number of Russians believing the reign of Nicholas II (1894-1917), Russia’s last tsar, ‘brought more good than bad’ had risen from 18% to 30%. Also, the number believing the 1917 Revolution to have been a good thing fell from 27% in 1999 to 19% in 2016, while those believing it to have been for the worse rose from 38% to 48%. …With communism having withered, the contours of an older Russia have re-emerged.

What’s happening in Russia seems to be more like the creation of a new nationalism that encompasses both the Soviet era and the pre-revolutionary past (Dal Santo continues this theme with two more interesting posts on the revival of the Romanovs). In the logic of nationalism, the nation is good, and so everything that helped create the nation is also good: Russia would not be what it is today without the Romanovs, or without Stalin, so both should be embraced as part of the nation’s heritage. Including Stalin in such a nationalist vision is only appropriate, as Stalin himself made strong appeals to Russian nationalism during the Second World War. The following is from Charles Clover, whose book I previously recommended:

As the German forces swept closer to Moscow, Stalin began rapidly to restore the idols of Russian patriotism that the Bolsheviks over the last 20 years and more had assiduously purged from the national existence. The patriarch of the Orthodox Church was summoned and told, as he stood dumbfounded, that the Church would be expanded, with new positions and new churches. Stalin famously drank a toast to the ‘Russian people’ and had the national anthem changed from the ‘Internationale’ to the Soviet ‘Hymn’ because, it was thought, soldiers would respond to an anthem dedicated to their motherland more readily than to a worldwide movement. One (probably apocryphal) story has it that Stalin ordered the Madonna of Kazan icon flown around Moscow in an aeroplane, evoking the ancient Russian practice of parading icons around cities on the eve of war to bring good fortune and God’s blessing. 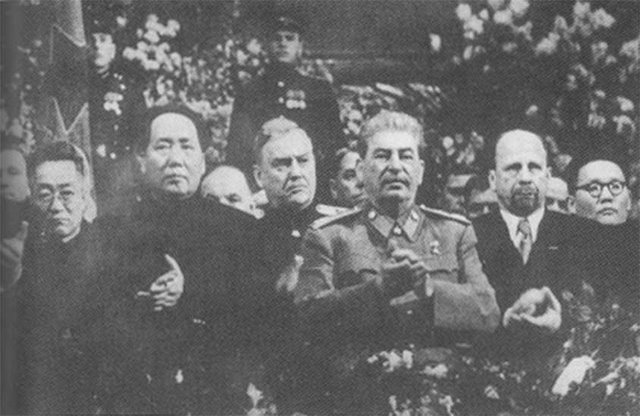 There seem to be some fairly strong parallels with China here. Xi Jinping’s alleged revival of the reputation and political methods of Mao Zedong has been a feature of much recent writing about Chinese politics. Suisheng Zhao’s recent article “Xi Jinping’s Maoist Revival” in the Journal of Democracy is a good representative of this line of argument:

Xi used Maoist imagery, rhetoric, and strategy to boost his own stature and revive public support for the Party. Mao Zedong, seemingly consigned to the bookshelf of history by Deng and his reforms, was dusted off and restored to a place of reverence as the unifier of the nation. In a collection of speeches that appeared following the CCP’s Eighteenth Party Congress in November 2012, Xi urged Party members to embrace “Mao Zedong Thought” lest China fall into chaos. On 26 December 2013, Xi honored the 120th anniversary of Mao’s birth by lauding him as “a great figure who changed the face of the nation and led the Chinese people to a new destiny.” Borrowing from Mao’s playbook, Xi launched a campaign to enforce CCP authority. Harkening directly back to the Maoist era, when officials were required to “get close to the masses” and to become intimately familiar with their needs and demands, Xi urged Party cadres to “focus on self-purification, self-improvement, self-innovation, self-awareness” or, as he put it in his folksy way, “take a good look in the mirror, comb your hair, take a bath, and try to fix yourself up.” The evocation of a Mao-style “rectification” movement—a tactic favored by the “Great Helmsman” when he wanted to purge rivals and enforce ideological discipline—was unmistakable. Xi, as observers noted, was “emboldening hard-liners who have hailed him as a worthy successor to Mao Zedong.”

I have previously been skeptical of the idea that Xi Jinping is trying to bring back Mao. Partly this is because it is pretty obvious that Xi is not in fact a Maoist: Mao was an ideologue who believed in permanent revolution and tried to destroy most forms of political and economic organization, while Xi is basically a nationalist organization man who wants to strengthen political order and discipline, not overturn them. And partly this is because Mao never really left: he continues to occupy his central place in the Communist Party’s history of itself. Xi is saying exactly the same things about Mao that Deng Xiaoping did–in fact often repeating Deng’s statements word-for-word. Far from consigning Mao to the “bookshelf of history,” Deng held that Mao had to be respected as the founding political figure of modern China.

Deng himself was a strong nationalist, and Xi Jinping is building on and expanding that nationalist approach. A Communist Party that sponsors “Confucius Institutes” around the world and glorifies the nation’s “feudal” past in expensive dramas on state television has gone a long way from what Mao would have supported. As in Russia, what’s going on seems to be more about building a nationalist narrative that includes both traditional culture and Communism. Liberals don’t really like the government saying nice things about Mao, and they use Maoist as a term of abuse. The official praise of Mao can indeed be hard to stomach, but I don’t think there is in any objective sense a revival of Maoism. It feels like China is not bringing back something old, but trying to create something new: a synthetic nationalism in which Mao and Confucius sit happily side by side as symbols of proud Chinese tradition.