A couple of people have asked what I think about this paper on Chinese infrastructure that is making the rounds, which claims that China “is headed for an infrastructure-led national financial and economic crisis.” It’s rather an obnoxious paper to read, in that it aggressively attacks a straw-man position that few people actually hold, and makes grand macro claims about China based on rather equivocal micro data. The general conclusion is certainly not wrong, though it is a fairly widely held view: China is very likely over-investing in infrastructure, and this is going to have negative consequences for its future growth and debt dynamics. But the actual content of the paper does not do as much to support this view as the authors claim. Here I will try to explain what I think is wrong with the paper, and outline the real reasons why China’s infrastructure investment is problematic.

The core of the paper is an examination of the performance of individual infrastructure projects in China, which the authors compare to projects undertaken in other countries. (The paper’s dataset is exclusively composed of infrastructure projects in China funded by the Asian Development Bank and the World Bank. One might therefore wonder whether the findings say more about the procedures of these multilateral institutions than about China’s unique circumstances. But let’s not quibble.) They find that infrastructure projects in China often cost more and take longer to complete than expected, and that planners often do not accurately forecast demand for the completed projects. Yet these seem to be general problems of large construction and engineering projects around the world:

Actual costs were on average 30.6 per cent higher than estimated costs, with a median of 18.5 per cent indicating that the distribution of costs had a heavy skew to the right (i.e. going over budget). … We found no significant differences in cost overruns between China and rich democracies—i.e. on our sample China’s cost performance is no better or worse than that of rich democracies. …

In the reports we studied for China, the typical BCR [benefit-cost ratio] for transport projects was 1.4 to 1.5, which is broadly in line with many other physical infrastructure assets such as large dams, road, rail, bridge, or tunnel capital investments. In other words, planners expected the net present benefits to exceed the net present costs by about 40–50 per cent.

So does that mean infrastructure spending is not an issue for China? Not at all, the issue is very much a real one. I would express it much more simply however: Chinese infrastructure projects generate low financial returns, but have to repay debts at interest rates that are far too high. Here are two numbers to illustrate the point: the average return on assets of state-owned enterprises in infrastructure sectors is around 2%, but the average interest rate that state-owned enterprises pay on their debt is around 5%. It is pretty clear this is not a financially sustainable situation–and note that this is true regardless of what you may think about the broader economic benefits of infrastructure projects, since what matters is the financial returns realized by the project sponsors. And the magnitude is sizable: 6-7 trillion yuan a year, based on Herd’s figures. 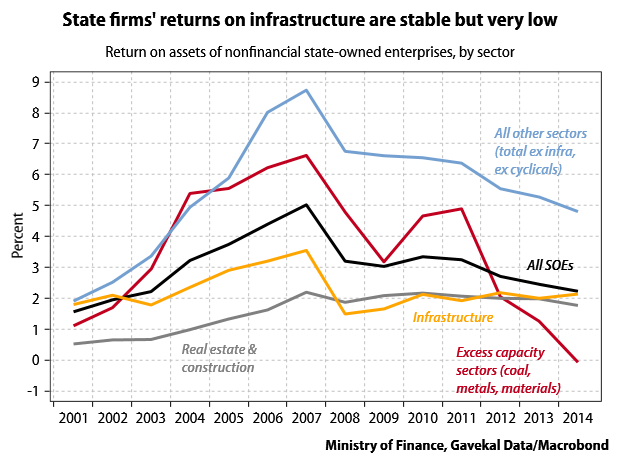 It’s an important peculiarity of the Chinese system that so much of its infrastructure is provided by state-owned enterprises, rather than directly by the government. The reasons for this are not totally clear–maybe it helps expedite stimulus spending, or keeps measured government debt low. But the consequences are pretty clear: by channeling a lot of essentially public-sector borrowing through financing channels normally used by private companies, China has created a large financial problem. Since the returns on infrastructure projects are on average not high enough to repay the debt SOEs take out to fund them, if the government does not want the projects to default then it needs to restructure the debt into lower-cost government obligations. This is exactly what is happening now. And since infrastructure investment is still growing by around 20% annually, and returns on infrastructure investment could plausibly fall even further (capacity utilization at thermal power plants is already at a 20-year low due to excess capacity), China will be dealing with this infrastructure debt problem for a while.