We’ve been hearing a lot lately about Xi Jinping’s “consolidation of power” within the Communist Party. But it is still far from clear whether all this consolidation has led to any fundamental change in the relationship between the central authorities and China’s many local governments. One commentator interprets Xi’s consolidation of authority, most recently in arranging for his own designation as the “core” of the leadership, as a way of ensuring that local-level cadres know that they need to follow Xi’s priorities and not anyone else’s. The most sympathetic account of Xi’s concentration of authority is that it is driven by his need to overcome local resistance to wide-ranging institutional and economic reforms (I don’t subscribe to this view myself, but it is held by some reasonable people).

These may indeed be among Xi’s intentions, but it’s hard to get a window on the Party’s internal operations to tell how successful he has been in carrying them out. Following the money is one alternative to reading the tea leaves: the institutions that drive the flows of money between central and local governments are certainly one very important aspect of how centralized, or not, China’s system might be. So here’s a chart to illustrate: 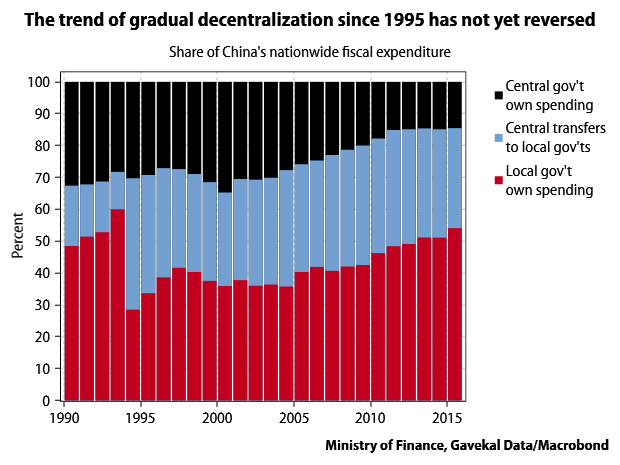 Arguably what is needed now is another round of rationalization and centralization of the fiscal system: the explosion of off-balance-sheet local government debt is one indication that actual decentralization is much more advanced than shown in my chart. This is one reason why I was  quite excited when Lou Jiwei was appointed finance minister in 2013. China has long been poorly served by its finance ministers, most of whom have been tax-maximizing bureaucrats rather than systematic economic thinkers. Lou by contrast has a clear view of the whole economy, and is known for his controversial public comments on matters like food imports and social benefits that most public officials will not touch. I’m sad to see him go now, since there is still a shortage of straight-talking economic thinkers at high levels of government. But while he has made progress on some important technical reforms, there has not really been a fundamental reshaping of central-local fiscal relations. Institutional inertia is probably the simplest explanation, but some blame probably also has to go to those in the system who have been arguing for even more fiscal decentralization.

So while we may be seeing attempts at various types of re-centralization in China, both in terms of political imagery and fiscal structure, it’s not clear yet that these attempts are succeeding, or must necessarily succeed. China in fact seems to be a good example of a thesis by the economic historian Charles Kindleberger about how the balance of power between central and local authorities tends to evolve:

Under normal circumstances, however defined, but with economic and social change occurring slowly, there is a strong preference for pluralism [Kindleberger’s term for local control]. Lesser units can experiment, adjust to local conditions, including tastes, compete with other cities and towns to their mutual benefit (as a rule). There is a possibility that local units give the individual more freedom, but this last in many communities is not guaranteed.

When a society is confronted with crisis, such as [war, depression, inflation], it is usually desirable, and in some cases necessary, to shift power to the center, especially if it has been widely dispersed. Such shifting, however, is not readily accomplished, and may not be possible at all because of institutional inertia.

The quote is from his Centralization versus Pluralism: a historical examination of political-economic struggles and swings within some leading nations, a somewhat obscure work that I did not know about until Perry Mehrling wrote about it in a different context.