I just finished Enrico Moretti’s The New Geography of Jobs, an admirably clear book about one of the most important trends of the day: the increasing concentration of American jobs, wealth and economic activity in a small number of urban centers. He argues that technology boomtowns like Seattle and San Francisco are what they are today in large part because of historical accidents that set off positive feedback loops, rather than because of any particularly enlightened policy. This means that it is not very obvious what all the cities that are instead trapped in negative feedback loops, losing population and jobs, should do:

People often have unrealistic expectations of their governments. The role that local governments can play in revitalizing struggling communities is less extensive than most voters realize and most mayors would like to admit. The reality is that a city’s economic fate is in no small part determined by historical factors. Path dependency and strong forces of agglomeration present serious challenges for communities without a well-educated labor force and an established innovation sector.

He is careful not to say that there is nothing to be done in the face of the pitiless onslaught of market forces, but it’s also clear that he thinks, probably quite rightly, that many local development policies (like tax subsidies to large employers) are ineffective and a waste of money. In the end he proposes mostly national policies: substantial increases in research and development funding, improved education, more openness to highly skilled immigrants. Rather than try to hold back the forces that are concentrating the economy in a small number of urban centers, in other words, the US should try to supercharge them, in hopes that even more centers will develop and allow more people to benefit.

The conclusion that benign neglect is the only real option for dealing with regional inequality seems to be the consensus wisdom of the economics profession. Since the US election though, there has been a pretty dramatic backlash against this counsel of despair. Here are three pieces that I found excellent, all of which are worth reading in full.

Adam Ozimek has a quite measured and detailed post:

The level of nihilism espoused by economists about what we can do to help struggling places in the U.S. is, quite frankly, strange. Whenever the issue of helping places is raised, critics jump straight to the most extreme examples, such as former mining towns. But the fact that some places need to shrink, and the costs of helping some places sometimes outweighs the benefits, is a far less powerful point than these critics imagine. Other places have survived the loss of major industries and gone on to thrive. Understanding why this happens sometimes and doesn’t happen other times, and what policymakers can do to help replicate the successes, are crucial policy issues that cannot be pushed aside by pointing out the impossibility or desirability of saving every place.

Finally, it’s important to note that the competition between thriving metropolises and the now-struggling parts of the country need not be zero sum. Increasing the human, social and physical capital of struggling places in this country can reduce the need for economic transfers at the federal level and can help make an overall more tolerant and open society that is better able adjust to the dynamism and globalism needed for a growing modern economy. It may help prevent residents in these places from desperately voting for policies that will only make things worse, like a trade war or immigration restrictions. These policies don’t make any economic sense, but when the best ideas for helping struggling communities consists of getting their most able residents to move away, it becomes a little easier to understand.

In a long and interesting piece, Steve Randy Waldman argues that not all of the self-reinforcing dynamics of urban concentration are necessarily positive, and that the political downsides are now pretty obvious:

Cities are great, but I think the claim that everybody moving to the very largest cities would yield a massive, otherwise unachievable, productivity boost is as implausible as it is impractical. Historically, economic activity was far less concentrated during the decades when America enjoyed its strongest growth. Perhaps technology has changed everything. But perhaps much of the apparent productivity advantage enjoyed by large, powerhouse cities over medium-sized cities is due to creaming, sorting, and particularly high-powered coalitions of rent-extractors, rather than hypothesized quadratic-returns-to-scale human connectivity effects.

Then, of course, there is all the stuff that economic analysis tends to overlook: Community, history, attachment to family, attachment to the land itself, the perhaps quaintly aesthetic notion that a civilized country should not be composed of gleaming islands in a sea of decay and poverty. And politics. Politics seems to be a thing now. Rightly or wrongly (and I think the question is more complicated than many of us acknowledge), the United States’ political system enfranchises geography as well population. …In the American system, piling people into a few, dense cities is a sure recipe for disenfranchising most of the humans. A nation of mid-sized cities distributed throughout the country would both spread the wealth geographically and yield a more balanced politics than the dream of hyperproductive megacities.

Finally, a fantastic and impassioned piece by Ryan Avent also tackles the regional inequality question, among many other recent failures of economics:

The economic literature is pretty clear that moving people from low productivity places to high productivity places is very good for both the people that move and the economy as a whole. It’s also pretty clear that place-based policies designed to rejuvenate regions which have lost their economic reason for being tend not to work very well. And one logical conclusion to draw from these lines of research is that government ought to care about people rather than places, should focus aid to struggling places on things like cash transfers or retraining schemes or efforts to boost the housing capacity of booming regions, and should not be sentimental about the prospect of once proud industrial cities emptying out. And maybe that logical conclusion is the right one.

But maybe that’s not the right conclusion at all. Maybe the right question, once again, is which is likely to be more corrosive of the legitimacy of valuable macroinstitutions: the long-run decline of whole regions of advanced economies, or the inevitable waste and inefficiency that would accompany an effort to revive those declining regions. And perhaps benign neglect would win that argument. Yet the argument ought to take place; economists should not ignore the relevance and importance of macroinstitutions and assume that the inefficiency is the clinching argument. 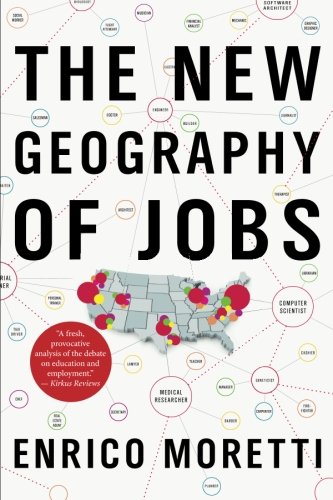