Here is a nice little piece of oral history covering some important episodes in the early history of China’s economic reforms. The translation below is an excerpt from a longer interview with Yang Qixian, a scholar who participated in the reform process in the 1980s (Chinese original here). I like it because it includes both some vivid practical experiences and some theoretical insights.

In the summer of 1982, Yang Qixian, as a member of the working group formed by the State Commission for Restructuring Economic Systems, went to Changzhou, Jiangsu province to push forward the pilot project for comprehensive reform. At that meeting, there were two things that drew his attention and left a strong impression: the glass chimneys for kerosene lamps, and the “tiger stoves.”

As Yang recalled, because at that time the electricity supply was inadequate, many families used kerosene lamps. The glass chimneys for the kerosene lamps were a commodity whose supply was planned, with the price fixed at RMB0.06. Because they couldn’t make money [at that price], enterprises did not want to produce the lamp chimneys. One residential community could get a quota allocation of one or two every few months, which would then be distributed. The lamp chimneys would first go to the hands of the community leader or production team leader, who could give them to whoever they wanted. Because there was a shortage of lamp chimneys, when people wanted to buy one they would have to treat the team leader to some food and booze; only by having a good relationship could they get the quota. The members of the working group on the comprehensive reform pilot discussed this phenomenon, and decided to liberalize the prices of some small commodities that were not of critical importance, and allow enterprises to organize production according to market demand.

The Changzhou comprehensive reform pilot used the kerosene lamp chimneys as an experiment, and the effect was of course very obvious: the supply shortage was solved very quickly. Yang Qixian recalled that after the price of kerosene lamp chimneys was liberalized, it rose to RMB0.2, a big increase from RMB0.06. “We asked people if they were upset about the price increase, and they said no. The reason they weren’t upset is that before they could sell three eggs for RMB0.06 and buy one glass chimney, now they can sell three eggs for RMB0.2, which can still cover the cost of one chimney,” Yang said. Afterward, the working group wrote a short report about the experiment, and Hu Yaobang [at the time, General Secretary of the Communist Party] immediately approved it; he felt this was a very good example, and that the prices of small commodities should be gradually liberalized.

The situation of the “tiger stoves” was similar to the kerosene lamp chimneys. At that time, for people to boil water they had to fire up the coal stove. Because coal was in short supply, in order to conserve coal they would organize “tiger stoves” [in the area around Shanghai, a traditional name for a local store providing hot water, tea and even baths]. The water jugs were lined up on the stove, and once the water boiled you only had to spend RMB0.01 to fill a jug and take it home. 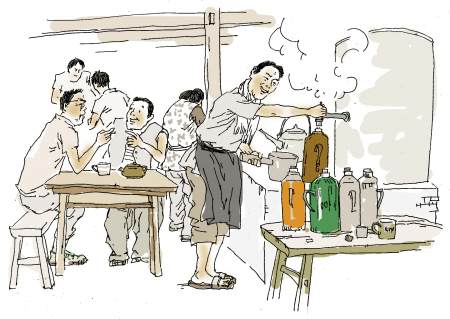 But tiger stoves could only be run by a collective, and so there were only a few in each city. When people wanted hot water, they would have to walk a long way–it was really not convenient. In the Changzhou reform trial, the working group decided to allow individuals to run tiger stoves, and also allow them to buy coal. Because of this loosening, the number of tiger stoves multiplied, and the price did not rise. People did not have to go so far to get hot water. The working group also wrote up this example in a report, and Hu Yaobang approved it, saying that small businesses should not be excessively restricted, and must be liberalized.

It is quite amazing that a discussion about hot water supply in one city of one province went all the way to the top of the Communist Party hierarchy.

Next, a more theoretical insight:

Another event that made a deep impression on Yang was the International Symposium on Macroeconomic Management held in September 1985, which was a landmark in the history of China’s reform and ideological emancipation. Because it was held on a boat called the “Bashan,” running from Chongqing to Wuhan, the media and scholars have called it the Bashan boat conference. …Foreign experts attending the meeting included Alec Cairncross from the UK, James Tobin from the US, Otmar Etminger from West Germany, Michel Albert from France, Janos Kornai from Hungary, Kobayashi from Japan, as well as Edwin Lim and Adrian Wood from the World Bank. Representatives from China included Xue Muqiao, An Zhiwen, Ma Hong, Liu Guoguang, Gao Shangquan and other scholars and workers, for a total of more than 30 people. As one of the organizers, Yang Qixian drafted the conference synthesis report.

Yang recalled that, although it was only a seminar, and the meeting was not long, it still had a far-reaching impact. The reason is that in the earlier stages of reform and opening up there was a lot of controversy about what the goal of reform should be. In 1984, the Third Plenary Session of the 12th Central Committee clearly put forward the concept of a “planned commodity economy.” But how exactly should a commodity economy be run? What should be the target and the model? What reforms are needed to establish a commodity economy? At that time their views affected us greatly.

For instance, Kornai of Hungary suggested that there were only two kinds of macroeconomic management in the world: one regulates mainly through administrative methods, the other regulates mainly through market methods. The first category can be divided into direct administrative regulation, such as the Soviet model, and indirect administrative regulation, such as the Yugoslav model. The second category can be divided into completely uncontrolled market regulation and market regulation under macroeconomic management. Kornai said that China should follow the model of market regulation under macroeconomic management. “These ideas were a great inspiration to us at the time, and later the target model of our reforms basically followed this line of thought,” Yang said.

These stories are great, and very appealing in their straightforward simplicity, though hindsight probably makes the decisions seem easier than they actually were at the time (the Bashan boat conference and Kornai’s influence have come up before on this blog, in this post).