In the grand scheme of things, not that long at all.

I’ve been reading a lot about the Soviet Union lately, and there are indeed these two large, multiethnic, Communist states have many things in common. But I’m starting to think that the most important difference might be a very simple one: the fact that Russia and the other Soviet republics were Communist in the strict economic sense–central planning and controlled prices–for much longer than China was.

Central planning in Russia could just be dated from the October Revolution of 1917 to the collapse of the Soviet Union in 1991. A more precise chronology might be from 1918, when the Bolsheviks nationalized industry and centralized distribution of grain, to the liberalization of prices and other economic reforms in 1992. But it’s 74 years either way: that’s two generations.

Think of what that means in terms of life experience: someone who was 25 years old during the Soviet economic reforms of 1985 would have been born in 1960; assuming an average childbearing age of 25 (on the high side), their parents would have been born in 1935, well into the Stalin’s rule. They would have to go their grandparents to find someone with any memory of how to survive in a non-planned economy. By contrast, a Chinese person who was 25 in 1985 would have had parents who had grown up in a non-planned economy, and could pass on useful experience and family business traditions.

I have not come across much systematic examination of this issue, but there’s an interesting discussion in a 1994 paper by Mark Selden, “Pathways from Collectivization: Socialist and Post-Socialist Agrarian Alternatives in Russia” (JSTOR link), who notes that while Chinese farmers eagerly embraced the decollectivization of agriculture, Russian ones did not:

Where does the call for reform or transformation of collective agriculture originate? In Russia pressures for reform have emanated from the highest levels of political authority, specifically, in recent times, Gorbachev, Yeltsin, and some of their close associates. Pressures for change have been weak and resistance strong not only among middle- and lower-level officials, but also among farmers in the collective and state sectors.

In recent generations numerous Russian farmers have made the transition from the rhythm of the agricultural cycle regulated by sun and season to the eight-hour day of the industrial worker. They have moved from the sickle to the combine harvest and from animal power to electricity and diesel power, but at the same time many have lost whatever command they and earlier generations may have had of the multiple skills of cultivation, marketing, and borrowing while becoming specialists in one or a few areas of agricultural production. For such people, the combination of wage and welfare guarantees, plus continued access to the private plots that produce approximately 25% of the value of Russian agriculture remains an attractive one. To abandon the guarantees provided by collective and state farms seems to most farmers a risky march toward an uncertain future.

Most important for comparative purposes is the fact that three generations of collective experience eradicated many of the habits, as well as the multiplicity of skills required for effective management of family farms in a market economy. By contrast, while Chinese farmers historically consumed a substantial portion of their harvests within the family, they also had a long and deep familiarity with private land ownership and the workings of local markets. And 30 years after collectivization, as family farms re-emerged in China, there remained an experiential basis, including networks of relationships and historical memories, on which Chinese family farms and market activity could be resurrected.

A 1997 World Bank paper also used a variable appropriately dubbed “market memory” to compare the different starting points and trajectories of transition economies in Asia and Europe; it is defined as the number of years under central planning. I’ve reproduced a table from the paper below: 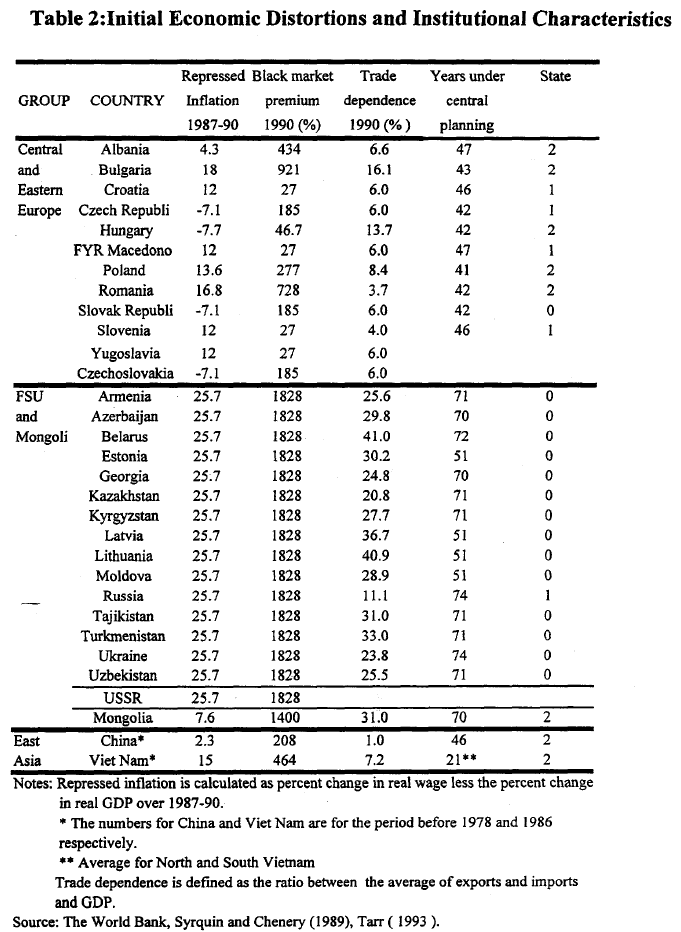 Again we see Russia and Ukraine topping the list with 74 years of central planning experience. The other Soviet republics are given 70 or 71 years, reflecting the fact that the USSR was formally established in 1922, so central planning got a slightly later start in other regions. The Baltic states of Estonia, Latvia, Lithuania, and Moldova were incorporated into the USSR in 1940 as a result of the Molotov-Ribbentrop Pact, and so had 51 years. And then the various Eastern European states became Communist at even later dates, in the aftermath of the Second World War.

I’m not sure why China is given 46 years of central planning in the table, which seems like an obvious error. The simplest dating would be from the establishment of the People’s Republic in 1949 to the beginning of economic reforms in 1978, or 29 years. This could probably be fine-tuned, as 1978 was mostly a political landmark. Local experiments in both rural and urban areas did begin then, but the breakup of agricultural collectives did not really take off until 1982, and nationwide changes to the management of non-agricultural companies had to wait until 1984. On the other hand, the beginning of central planning could perhaps be pushed forward until 1952 or 1953: the Communist Party after its victory in the civil war initially focused on stabilizing the economy, and took a few years before moving full-on to nationalization and five-year plans. Still, roughly three decades.

But it’s possible to argue for an earlier date for the collapse of central planning in China, on the basis that during the Cultural Revolution actual government authority over the economy had significantly eroded. The work of the Hong Kong-based historian Frank Dikötter offers some evidence for this:

If the Great Leap Forward had destroyed the credibility of the Party, the Cultural Revolution undermined its very organization. The extent to which ordinary villagers reconnected with the market in the last five years of the Chairman’ s reign is amply illustrated by evidence from the archives. …

Wealthy regions joined those mired in poverty in a silent revolution that subverted the planned economy. In villages along the southern coast, people raised ducks, kept bees, grew fish, baked bricks and cut timber, always in the name of the collective. By late 1971, in the county of Xinchang, Zhejiang, which housed a population of roughly a quarter of a million people, some two-thirds of all villagers were independent – or “go-it-aloners” in the parlance of the time. Much of this was done with the tacit consent of the local authorities, who rented the land to individual households in exchange for a portion of the crop. A year before Mao Zedong’s death, the habit of leaving the collectives to try one’s luck on private land or in underground factories was described as “widespread” throughout the province. …

Some wealthier villages not only planted profitable crops for the market but also began establishing local factories. This was common in many parts of Guangdong. In Chaoan, just outside Shantou, where entire villages had been reduced to poverty after embroidery was declared to be “feudal” at the height of the Cultural Revolution, historic links with the overseas community were revived after the Ministry of Light Industry lifted the trading restrictions in 1972. Two years later, up to half of the women in some villages once again specialized in drawn work and embroidery. …

The growth of cottage industries in the Yangtze Delta followed old manufacturing habits and trading routes that predated liberation. They were revived as soon as the hand of the state weakened. Much as Shantou had a long tradition in exporting embroideries to overseas markets, for many centuries the villages around Shanghai had specialized in household goods, ceramics, cloth, silk and other handicrafts. … The extent to which rural industry reconnected with its past in the early 1970s is shown by statistics: in Jiangsu province as a whole, industry represented a mere 13 per cent of total output in the countryside in 1970, but a phenomenal 40 per cent by 1976. These factories were often collective, if in name only.

So you could even argue that effective central planning in China was only practiced for a couple of decades, and, in at least some places, traditions of rural private industry were already reviving well before 1978. The long-term damage to China’s human capital and institutions from the detour into central planning was certainly significant, but was probably much less than in some other Communist countries. The post-1978 “reform era” is now closing out its fourth decade, and so has already lasted quite a bit longer than the planned economy did.

On this note, spare a thought for the people of North Korea, where Communist rule has now endured 72 years and counting, and is much more regimented and isolationist than the Soviet Union was in its last decades. The experiences of North Korean defectors to the South have already made it clear that the North’s people are very poorly equipped to manage in a market economy–much worse than East Germans were when the Berlin Wall fell.