Here is an interesting article from Zhou Tianyong, a well-known professor at the Central Party School in Beijing, that adds a fresh angle to the discussion over the effects of China’s hukou system. He argues that there is now a large group of people who have been prevented from urbanizing by hukou restrictions, and who realistically will never be able to urbanize in the future–thereby resulting in a permanent loss of income.

The piece is short and very clear, so without further ado here is my (slightly abridged) translation (Chinese original here):

A person has a natural life cycle, from birth to old age, from entering the workforce to retirement, from being able to adapt to the urban environment to being less able to adapt to the urban work and living environment in middle and old age. Thus in an individual’s life there is a fixed window of time when they can migrate to the city. If they cannot enter the city and become city people in that window, then they have missed out on urbanization. This is a phenomenon that occurs under China’s system, and needs to be carefully examined and analyzed to understand the transformation of China’s dual [urban-rural] structure.

In 2013, some economists put forward the view that urbanization will drive the rapid growth of China’s economy in the future. This is because because the level of urbanization in China was only 52.6% in 2012, while in developed countries urbanization has reached 75% or even 80%. The lag in China’s urbanization compared to developed countries is, in this view, actually a latecomer’s advantage. China’s urbanization rate can in the future increase by 1 percentage point every year, and become a strong driver of national economic growth. This is one of the arguments that some people use to argue that China’s economy can grow at more than 8% for the next 15 to 20 years. …

There is another point of view that China’s “floating population” of rural migrant workers face a lot of obstacles in urbanization. Many rural people are able to migrate to cities when they are young, but in the end they cannot bring their families with them to the city and cannot become city people. This group of people have missed out on urbanization because of the hukou system and control of migration: because cities do not provide education and other public services, or because they do not have any income from rural land while urban housing prices are too high. 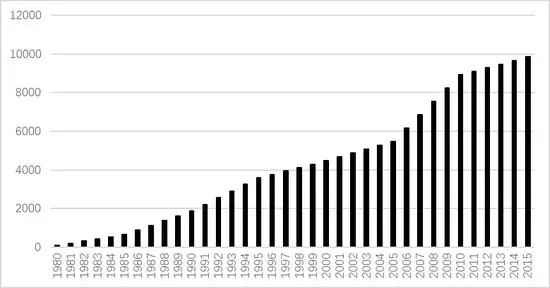 But urbanization does not wait for people. The high fertility rate and high population growth rate of the early period of industrialization have created a huge potential urban population, but many of them cannot enter the cities, or once they enter the cities they cannot become city people. Young people leave the village to work, and old people leave the city to return to the village. Those who cannot become city people at the right time of life end up becoming rural people who have missed out on urbanization.  …

And because of the decline in fertility and population growth at the later stages of industrialization, which is especially sharp in China because of its forced family planning policies, the proportion of people in rural areas who can still urbanize is falling. This is quietly lowering the rate at which the future rural population can urbanize.

Thus, in countries where there are obstacles to migration during the process of industrialization, the level of urbanization that can be achieved at the end of industrialization may be much lower than countries with free migration or that provide assistance for migration. With 7% of China’s population already having missed out on urbanization as of 2015, and this proportion set to gradually rise in coming years, it is impossible to reach 75% urbanization within 10 years.

The existence of a large group of people who have missed out on urbanization creates economic losses in three ways. First, an overly large labor force in agriculture results in relatively low productivity. These people could have higher productivity in the city, but in rural areas they can only do some basic agricultural work, which is a huge loss for the national economy. Second, the delay in urbanization results in a loss of consumer demand. Because rural migrant workers cannot easily urbanize, there is a big gap between their spending power and that of true urban residents. Third, people do not realize their potential to create and distribute wealth, which leads to a huge loss of national income. Much rural land is abandoned because it cannot be used for large-scale operations, houses are rundown and the woods empty because the land cannot be allocated by the market and re-purposed by investors. In fact rural land is becoming a zombie asset that cannot be re-allocated to other uses because of restrictions on private capital, resulting in a huge loss of potential output and value.