The public justification for these moves is generally that they are necessary for China to surmount difficulties and achieve urgent tasks. Here for instance is what the Global Times quoted Su Wei, a professor at the Chongqing Party School, as saying immediately after the proposal to remove term limits on the presidency was publicized:

Especially in the period from 2020 to 2035, which is a crucial stage for China to basically realize socialist modernization, China and the Communist Party of China need a stable, strong and consistent leadership. So removal of the section of the clause about the presidency in the Constitution is serving the most important and fundamental national interest and the Party’s historic mission.

The “crucial stage” is an interesting formulation. It does not quite rise to the level of “crisis”–and it would be difficult for China’s leaders to claim the country is in crisis while at the same time taking credit for its decades of increasing prosperity. But it is commonplace in Chinese official rhetoric to emphasize that China faces both opportunities and risks, that it has done very well but faces great challenges in the future (and, of course, it helps that this is actually true).

As Xi Jinping himself put it in a speech to senior officials in December:

The general trend in our country is good, but we also face many difficulties and risks in our way forward.

He also used a Chinese idiom that is usually translated as “be prepared for danger in times of peace” and called on officials to have a “sense of urgency” (忧患意识); another translation might be “crisis mindset.” In other words, China might not be in crisis yet, but it could fall into a crisis if it does the wrong things. 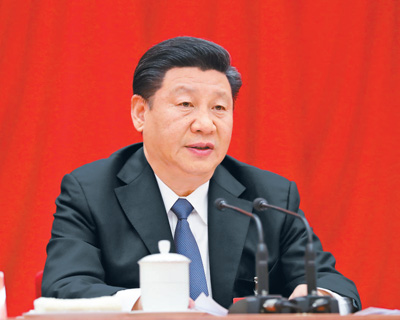 Discouraging historical parallels are all the rage at the moment, though I think the comparisons with Mao are usually overdone. Having been doing some reading on the early days of the Soviet Union recently, one that is top of mind for me is its transition from the mixed economy of the 1920s to full-on central planning. This radical centralization was very much driven by a crisis mindset: the government felt internationally isolated and at risk of invasion, which necessitated the rapid state-driven buildup of defense industries:

The Bolsheviks in the 1920s had fresh memories of the intervention by the West and Japan that took place during the civil war. Stalin’s “socialism in one country” represented a realistic recognition of the fact that no immediate socialist revolution could be expected in Western Europe. However, the regime was still fully committed to its revolutionary goals and was aware of the inherent tension in its relations with the West. The state of isolation in which it found itself and the overwhelming military and technological power of the capitalist countries “encircling” the Soviet Union caused great fear of another foreign invasion. The “plots of Chamberlain and Poncare,” the breaking off of diplomatic relations in 1927, and the activities of the the Japanese in the Far East all added to the threat perceived by the regime. Although some war scares were fabricated by factions in the party, the general belief in the party as a whole was that the regime would face war before very long. In order to defend the revolution, rapid industrialization was considered a necessity.

Of course, it seems pretty obvious that China today is not in a panic about imminent invasion and is not about to put the economy on a war footing. Official rhetoric is not martial and war-fearing; quite the opposite. In the same set of constitutional amendments that abolished term limits on the presidency and vice-presidency, a phrase was also added stating that China

follows a path of peaceful development, and pursues a mutually beneficial strategy of opening up in developing diplomatic relations and economic and cultural exchanges with other countries and working to build a community with a shared future for mankind.

So the crisis imagined in official rhetoric does not seem to be primarily a military one resulting from China’s unstable international position.

I think that the sense of threat and the crisis mentality have instead been transposed to the realm of capitalism: the danger to China comes from the economic competition between nations rather than military rivalry.

The clearest exposition of this view is in the Made in China 2025 plan, an industrial policy document whose importance and influence have only become more apparent since it was issued in 2015. The plan aims to achieve a massive transformation of China’s manufacturing sector to take advantage of new technologies and strengthen its capabilities.

But this transformation is motivated primarily by fear. While in Europe and America Chinese manufacturing is sometimes perceived as a world-conquering giant that has laid waste to traditional industries and thrown millions out of work, Chinese leaders see more weakness rather than strength. The world is being transformed by new technologies that are being invented outside of China and controlled by companies that are not Chinese. Meanwhile labor costs are rising are and China is losing market share in low-end industries like textiles and clothing.

These comments about the plan from an MIIT official in Chinese state media are revealing:

China is being pressured from both sides. Advanced economies such as the United States, Germany and Japan have all formulated policies supporting further development of their own manufacturing. At the same time, emerging economies such as India and Brazil are also catching up with their own advantages.

It is remarkable how similar this formulation is to the World Bank’s original definition of the “middle-income trap,” which was used to describe economies that were

It seems that the centralization of power, therefore, is conceived to be necessary in order to help China overcome the middle-income trap. To successfully escape the middle- income trap and navigate the crucial period requires a wholesale transformation of the economy, which only enlightened leadership from the top can achieve.

If this interpretation is correct, one obvious implication is that external threats are not going to make China give up on its industrial policies. The Trump administration is reportedly preparing a broad package of tariffs and other restrictive measures aimed at punishing China for its “industrial policy apparatus that is designed to suck technology out of the world.” But such punishment will only reinforce the crisis mindset in China, and the sense that it is at great risk of losing out to the West. The  likely response is that China will double down on its centralization and industrial policy, which will be seen as even more necessary as the world trade environment becomes more hostile.