Here is an interesting paper on a lesser-studied period in China’s family planning policy. The starting point is the simple observation that fertility in China declined more in the decade before the introduction of the one-child policy in 1979 than it did in the decade after it: the total fertility rate dropped from 5.7 children per woman in 1969 to 2.7 in 1978, and then declined marginally to 2.5 in 1988. 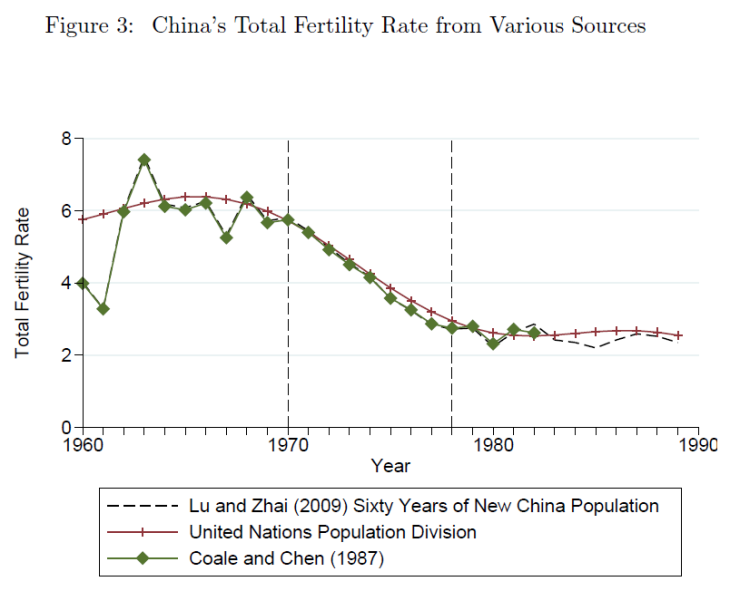 So what happened in the 1970s? That is the subject of the paper, “The Power of the Government: China’s Family Planning Leading. Group and the Fertility Decline since 1970”; here is an excerpt with some history:

China’s family planning policy has a much longer history than that of the One-Child Policy. The history of China’s family planning dates back to December 1962, with the release of the No. 698 document. In 1964, the State Family Planning Commission was established, after which commissions at the province, city, and county levels were gradually set up across the country. However, the outbreak of the Cultural Revolution negatively affected these family planning institutions, most of which ceased to function in 1966.

In early 1970, Premier Enlai Zhou emphasized that the implementation of a family planning policy should not stop. In 1971, the State Council released document No. 51, “Report on Better Implementing Family Planning Policy,” signaling the recovery of family planning from the Cultural Revolution. The document required provinces to set up a Family Planning Leading Group to organize and lead family planning work. A pilot run was initiated in 1970, and, by 1975, all provinces had set up a leading group. The leading group is an important and high-level provincial institution. In most cases, its leader is also the main leader of the provincial party committee.

The primary duty of the provincial Family Planning Leading Group is to promote the implementation of family planning policy under the guidance of the central government. By 1960, the slogan “Later, Longer, Fewer” (wan, xi, shao) had already appeared, although no real action was enforced until the formation of the Family Planning Leading Group. “Later” means marriage at a later age–23 years for women and 25 years for men. “Longer” means a birth planning rule of waiting for more than three years between births. “Fewer” means that one couple could have two children at most. Concrete examples of rewards and punishments include paid vacations after a sterilization operation, priority in housing arrangements, and no subsidies for workers facing difficulties as a result of unplanned childbirth.

Although there is narrative evidence suggesting that the campaign had several coercive elements, overall, the policy enforcement was much more lenient during this period compared to that of the One-Child Policy period, when an above-quota birth could result in huge fines and even the loss of one’s job.

The authors, Chen Yi and Huang Yingfei, use the different dates on which family planning leading groups were established in different provinces to estimate the effect of the policy; their model suggests about half of the total decline in fertility in the 1970s can be attributed to the “later, longer, fewer” policy. 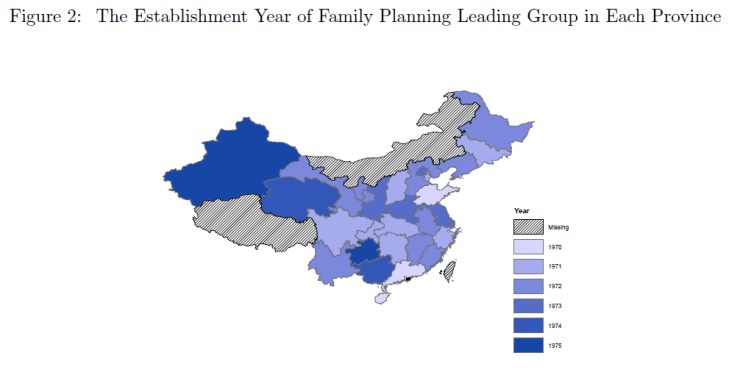 What changed most dramatically after the introduction of the one-child policy was not total fertility, but the sex ratio at birth: the ratio of male to female children surged in the 1980s and 1990s due to selective abortions of female children. The authors suggest two reasons for this change. First, the family planning policies in the 1970s were less coercive than the one-child policy, so couples who had a preference for sons could more easily exercise that preference by just having another child. Second, ultrasound technology did not become widely available in China until the late 1980s, so in the 1970s it was generally not technically possible to determine the sex of an unborn child.