Pieter Bottelier has observed a lot of recent Chinese economic history, starting with his tenure as head of the World Bank’s office in China from 1993-97. But his new book, Economic Policy Making in China (1949-2016): The Role of Economists, goes farther back, and opens with an interesting collection of “puzzles and surprises” he encountered doing research on these earlier periods.

I quite enjoyed these observations; here is a selection of a few of them:

If Chiang Kai-shek had been able to control hyperinflation during the civil war, it would have been much harder for the communists to prevail in that conflict. I was surprised to see how much importance the communists attached to financial stability and how effective they were in fighting inflation before the establishment of the PRC in 1949. …While most historians typically focused on the political and military achievements of the CPC, I found that the financial history, including a surprising degree of fiscal conservatism and appreciation of the importance of financial stability, deserves more attention.

To reduce the risk of social instability, there was a compelling need for job creation in urban areas after the Cultural Revolution. One of the first and most important reform measures in the late 1970s was to legitimize and facilitate street vending and other labor-intensive retail trading. Most of the millions of people returning to the cities after the Cultural Revolution had been forced by the Party to undergo “re-education” through labor in rural areas. If it hadn’t been for the special efforts to create job opportunities in urban areas for these people, Deng Xiaoping’s economic reforms might not have been as successful as they were.

I was surprised to learn how important this had been in the evolution of China’s reforms. In the West, we normally don’t attach a lot of importance to names; we ask rhetorically: “what’s in a name?” By contrast, in China the name of a person, thing or concept is typically very important; a name has real meaning. One of the more important contributions Jiang Zemin made to China’s reform efforts when he was the Party’s General Secretary (1989-2002) was to give a name to the goal of these efforts.

Gu Zhun is now recognized as one of the most important thinkers of the Mao era. He was a brilliant and courageous intellectual; an original thinker with a fiercely independent, some say stubborn, mind. Like Sun Yefang, he opposed some of Mao’s economic policies in the 1950s. He died (of lung cancer) at the age of 59. Had his health kept up for another decade, he might have emerged as one of the most important Chinese reform economists under Deng Xiaoping. Given the breadth and depth of his interests and academic pursuits, he would be called a “Renaissance Man” in the West.

There are several more surprises discussed in the introduction, and I could have read even more of them – it’s a nice format. But the book then shifts gears, and becomes mainly a series of biographical sketches of a number of people who were influential on Chinese economic policymaking (despite the title, not necessarily trained economists). Both parts were reminders of just how much there still is to learn about even fairly recent history in China, so much of which is still obscured by a combination of official propaganda and reformist mythmaking. 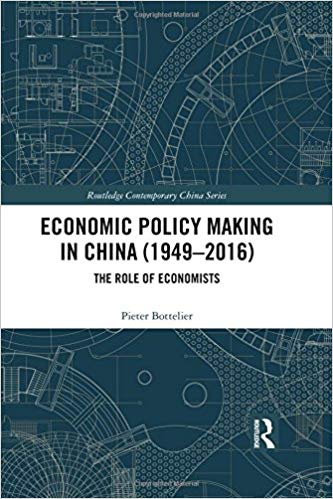