The WSJ has another good article about SOEs in China, this one focusing on Hainan Air’s efforts to compete with the three big state-owned airlines. Air transportation is one of China’s most state-dominated industries, with private-sector firms accounting for less than 10% of investment in the sector (but a somewhat larger share of passenger volume, according to the WSJ’s graphic). In manufacturing by contrast private firms account for 90% of capital spending. 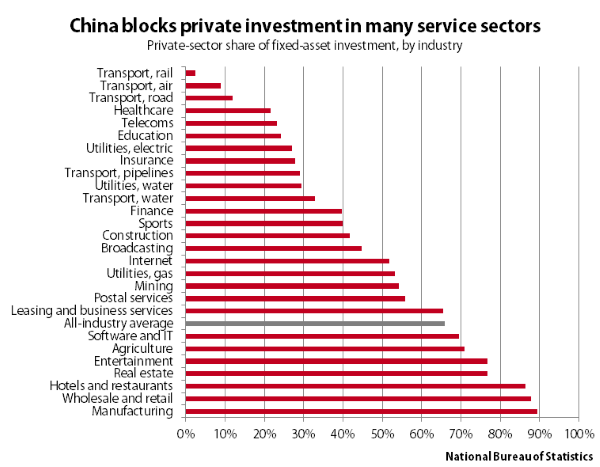 So if we are going to see movement to a more liberalized economy in China, then what we should look for is signs of private firms getting more access in these state-dominated sectors. Hainan Air seems to be a pretty well-managed firm (I’ve always liked their service), and as the article shows has tried many different ways to break out of the ghetto of second-tier airports and routes that regulators have placed it in.

But the short version is that Chinese regulators are not bending over backwards to help a private-sector competitor. What this example shows is how the oligopoly of the three big carriers does not have to be mainly maintained by an explicit regulation or law, but can be enforced pretty effectively just through a series of discretionary government decisions. I suspect this is the case in a lot of China’s state-dominated sectors: SOE market power domination is not so much written into law as the result of an inherited industry structure and repeated government action to prevent change to that structure. Of course, there are also examples like the salt industry, where there are written regulations that will have to be changed if recent pledges to open it up to more competition are to be realized.

What this means is that liberalization is going to be hard work for China — it’s not simply a matter of repealing legislation that discriminates against private firms, but requires lots of detailed work to change entrenched practices and priorities in many different industries and parts of the bureaucracy. Personally, I think liberalizing these state-dominated service sectors is the most important economic reform that China could carry out. In contrast to signs of excess capacity in heavy industry, there are still obvious bottlenecks in delivery of many services, like healthcare. And given China’s now reasonably high incomes, a lot of the future growth in consumer spending is going to go to services. So shifting more investment into what should still be relatively high return sectors would help keep China’s overall growth rate from falling too sharply. But it’s not going to happen quickly or easily.