How far back do the current economic problems of some Chinese provinces go? To a large extent the current downturn looks mainly resource-related, a result of the intense slowdown in housing construction. But it is also hard to avoid noticing that many of the places that are doing poorly have historical legacies that could be, shall we say, problematic. The three northeastern provinces, which were the cradle of state-owned industry in the 1950s and have been receiving heavy government support for decades, have been among the worst performing of all. Here are some interesting comments from Li Pumin of the National Development and Reform Commission, at a press conference on the Northeast in August 2015, which convey some of the flavor of the political discussion about the Northeast (my translation):

The General Secretary [Xi Jinping] in July and the Premier [Li Keqiang] in April each made inspection tours of the Northeast, and also held forums. This shows that Party Central and the State Council attach great importance to the revitalization of the Northeast. Why is it so important? …The Northeast was the first part of our country to be liberated, and it also has the best industrial base. During the First Five-Year Plan period when the Soviet Union helped build 156 projects, 58 of them were in the Northeast, or one-third of the total. This formed a large group of backbone enterprises in resources, energy, equipment manufacturing and national defense. As the “first born” of the People’s Republic, the Northeast made great contributions to building our country’s industrial system and the whole national economy. The comrades here today are perhaps rather young, but if you ask the older generation [they will tell you that] in the 1960s and 1970s, the Northeast produced a lot of equipment, technical information and personnel that supported the development of the mainland. …Also at that time the Northeast made other contributions, producing much oil, grain and timber to support China’s economic construction in the early days after Liberation. It should be said that as the “eldest son” of the People’s Republic, the Northeast has made great contributions, so the People’s Republic will not forget this during the current difficulties. This is the historical perspective.

Li’s mention of the Soviet projects in the 1950s piqued my interest–some possible data to work with! It was in fact not too hard to dig up a complete list of the projects, and from that make a few observations (there are a few lists on the internet, but I also confirmed these with printed sources). Indeed, the Northeast (aka Manchuria) received the lion’s share of the Soviet projects. These were the flagship projects of the early days of the planned economy, as China worked hand-in-hand with Soviet experts to replicate their model–which at the time, in the afterglow of the Allied victory in WWII, was seen as quite successful.

The bias toward the Northeast was perhaps even more dramatic than Li’s comments indicate. Many defense-related projects were built in two inland provinces, Shanxi and Shaanxi (Xi’an today is still one of the centers of China’s state-run aerospace industry). But civilian projects, mostly in heavy industry, were focused on the Northeast, which got 50 out of 106 projects (see the table below). The rest were mostly scattered around northern and inland China. What is remarkable about the map below is that not a single province on the southern or eastern coastal province was chosen as the site of a Soviet project in the 1950s. This is a clear sign how Mao and China’s early planners wanted to narrow the gap between the coast and the inland by channeling resources to the interior (keeping the defense industry far from potential attack was also part of the strategy.) 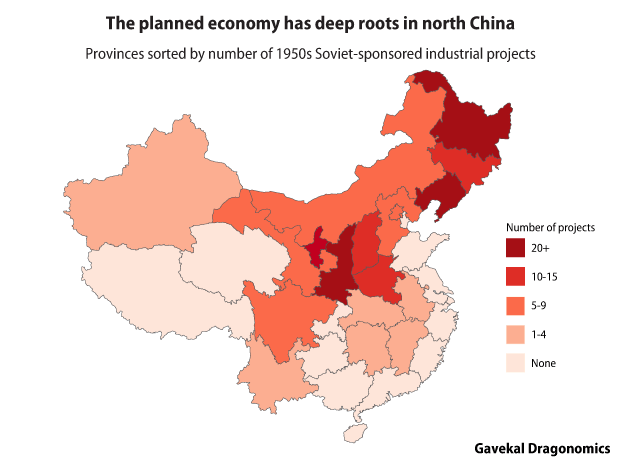 The northern bias of the early planned economy does seems to explain something about China today–anyone who has traveled around the country can attest to the obvious differences between north and south. Try doing a simple “billboard test”: the billboards beside airport highways in the north advertise giant state-owned enterprises; down in Guangdong and Zhejiang, they advertise private firms and trade fairs. The flavor of urban life is also very different, with more small businesses, more variety in domestic brands and more vibrant shopping streets in the south.

On the other hand, I haven’t been able to come up with a very strong quantitative relationship. There is a positive but pretty weak correlation between the number of Soviet projects a province had in the 1950s and the size of its state sector today, really nothing to write home about. As my index of the influence of state-owned enterprises shows, the provinces where the state sector dominates most are the giant cities of Beijing and Shanghai, and the more remote western provinces that depend mainly on government projects. While the regional policy of the 1950s focused on channeling resources to the north and the northeast, in more recent decades the west has been the favored recipient–and China in the 1990s had a lot more resources to work with than it did in the 1950s. The Soviet-style planning of the early 1950s laid down one regional pattern, but the Soviet model fell out of favor in the 1960s, and subsequent decades had different priorities. So today’s regional pattern is really an overlay of different influences at different times.

So going back to the question I asked at the beginning: do the roots of today’s problems go all the way back to the 1950s? On the data I have now, it would be rash to say that the Northeastern provinces were condemned to have a recession in the 2010s because the Soviets built a lot of factories there in the 1950s. On the other hand, I cannot say that these two facts are completely unrelated. I’m still trying to tease out exactly how they are connected.

Appendix. Here’s the complete regional breakdown of the Soviet assistance projects, most of which took place during 1952-60. Manchuria is in bold.

(Note to nitpickers: yes, my table only shows 149 projects, rather than the 156 mentioned above. This is because in 1983 the official list of actually completed Soviet projects was revised to 150 from 156; one of those was a defense-related project that, for unexplained reasons, was counted as two projects for statistical purposes, and I didn’t bother to adjust for this.)