There is an interesting new Federal Reserve paper by Ryan Monarch that looks at some very detailed data on the relationships between US companies and their Chinese suppliers. The main finding is what he calls the inertia in these relationships: US importers tend to be reluctant to change Chinese suppliers, even to get a lower price. And when they do change suppliers, they often go to one that is located not very far from the old one. Here’s the key graphic and the author’s summary:

Two facts are clear from Figure 1. First, there is a significant share of U.S. importers who maintain the same supplier over time. Even though the number of potential exporting choices is increasing over this time period, the share of importers using the same supplier year-to-year is 45.9%. As a benchmark, given that there are an average of 30 Chinese exporters to the U.S. per HS10 product in the data, if importers were choosing their partners randomly each year, the probability of staying would be 1/30, or 3%. Thus path dependence is far higher than would be expected if importers were choosing their supplier randomly. Secondly, among those firms who do choose to switch, approximately one-third of all importers remain in the same city as their original supplier. Using a similar benchmark as above, random exporter selection would imply a 12-13% chance of staying in the same city. Thus there is strong inertia keeping firms in their original city, even if they choose not to use the same supplier as before.

Much of the rest of the paper is about how making it easier for US companies to find trusted new suppliers could lower import prices. I’m more interested in a different angle: what this importer inertia means for the Chinese suppliers and for regional development within China.

Chinese exporters are clustered in the coastal provinces, and for years people have been talking about how rising labor costs in those provinces will push manufacturing inland. The government has embraced this putative trend as a development strategy, building up infrastructure in the inland provinces to lower transport costs and actively encouraging relocation (see for instance this good Reuters piece on the drive to develop textile manufacturing in Xinjiang). Yet despite conventional wisdom and government policy, the inland provinces’ share of Chinese exports is only marginally higher than it was a decade ago. 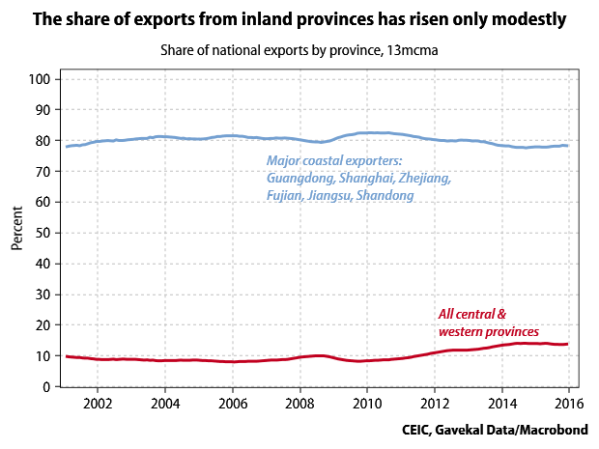 Inertia helps explain why: existing trade relationships, concentrated in the coastal provinces, change only slowly, and when they do change the geographic shift is likely to be close. The need to maintain customer relationships is thus likely another reason for why manufacturers in the coastal provinces are not in fact so terribly eager to relocate inland. Here is a good observation from a recent Bloomberg article on Guangdong:

By moving elsewhere in China, factories may be able to trim wage bills or gain access to cheaper land, but they lose the concentration of suppliers, logistics and services that Guangdong has built up over 30 years. Gao Dapeng, CEO of Desay SV Automotive Co., which makes car navigation systems in Huizhou, said the overall cost saving of moving to an inland province like Chongqing is only about 10 percent, and it would mean the plant would be hundreds of miles from its suppliers. He said the company is not sure if the relocation is worth that.

It seems like the network effects and economies of scale and scope that China’s coastal provinces have developed are fairly powerful advantages, against which the cheaper labor and cheaper land in inland provinces are not proving as attractive as expected. Or to put it a different way, the cost of switching suppliers remains high, despite policies aimed at reducing it. The same issue could be affecting the lower-wage Asian economies who have been trying to grab export market share from China–which they have, but not as much as some economists expected, as Mark Magnier reports in the WSJ.