A passing reference from the encyclopedic Pseudoerasmus sent me to the work of Paul Caruana-Galizia, who has done an impressive series of papers quantifying historical income levels on a regional (rather than the usual national) basis for many countries.

His paper on China, written with Ye Ma, gives us provincial per-capita GDP for the late 19th and early 20th centuries — an essential resource for comparing patterns of development over a longer time period.

The paper inexplicably does not include a map, so I have made a couple myself: 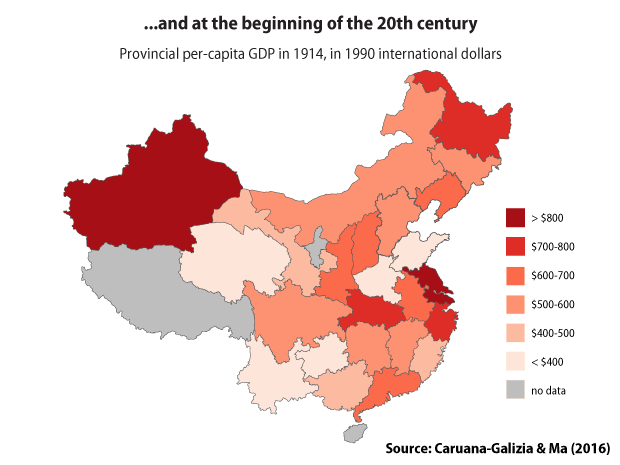 (Note: In these maps, Hebei includes the present-day municipalities of Beijing and Tianjin, Jiangsu includes Shanghai, and Sichuan includes Chongqing.)

The decline of incomes across most provinces (with Jiangsu and Xinjiang notable exceptions) is visually very obvious. Regional inequality was also basically stable over this period, probably reflecting the absence of sustained growth. Here is some useful commentary from the paper for context:

How do these per capita income levels compare with Europe’s? In 1873, Heilongjiang was China’s richest province with a GDP per capita of $870. In 1870 Europe, there were eight regions out of a sample of 200 that had per capita incomes between $800 and $950. Of these eight, five were in Austria-Hungary, one in France (Haut-Garonne), one in Germany (East Prussia), and one in Spain (Extremadura). These comparisons add weight to the argument by Pomeranz that some European areas were at similar levels of development to Asian ones. The fact remains, however, that China’s richest province – some 43 per cent above the Chinese average in 1873 – was only as rich as Europe’s poorest regions. … By the close of the period, Jiangsu surpassed Heilongjiang as the richest Chinese province with an income of $853. The only comparable European region is Dalmatia ($874).

On a macro level, the results corroborate histories of national economic decline and stagnation. China’s mean provincial per capita income compound annual growth rate over the period was −0.20 per cent. The internal disorder and continuous shocks to the economy in the forms of rebellions, foreign wars, and natural disasters meant that most Chinese were better off at the end of the nineteenth century than they were at the start of the twentieth.

Ma and de Jong’s numbers show that Chinese real GDP per capita dropped by 10 per cent from 1873 to 1912. Looking to Europe for comparisons, we see that Italian regions enjoyed an annual growth in per capita income of some 1.2 per cent, similar to that in France. These figures fit with Gernet’s claim that China’s ‘tragic period’ coincided with Europe’s ‘acceleration.’

And here’s the original table for reference: