The past six months have been an extraordinary period for Chinese politics, with a steady series of high-level events and major changes unprecedented in recent history. The two themes running through all of this, in both the propaganda and the substance, have been the primacy of Xi Jinping personally and the Chinese Communist Party institutionally. Here is a sample of what this sounds like, taken from the recent organizational reform plan that aims to expand the Party’s role in decision-making and management.

The leadership of the Communist Party of China is the most essential feature of socialism with Chinese characteristics. Party, government, military, civilian and academic; east, west, south, north, center, the Party leads everything. … We must improve the Party’s ability to set the direction, plan for the big picture, determine policies and promote reforms; we must ensure that Party leadership is comprehensive, and we must ensure that Party leadership is stronger.

This is not simply a rhetorical change: the whole organization chart of the Chinese government is being redrawn. In my bailiwick of economics, a new Party economic and finance committee has taken over the setting of policy priorities, a task that in previous administrations had been considered the main responsibility of the State Council (essentially the executive branch of the Chinese government). The first meeting of this committee this week sent an important signal that “the centralized and unified leadership of the Party Center in economic work is being strengthened,” according to the official Xinhua News Agency.

But what does “strengthening“ Party leadership really mean? It’s not as if anyone was in doubt that the Communist Party is in charge of China, and has been for six decades now. The Party and the government may be separate institutions, but they meet at the top: Xi Jinping is both the head of the Party and the head of state, and so was Hu Jintao before him, and so was Jiang Zemin before him. Almost every person making any political or administrative decision of any import in China is a Party member.

The truth is that the Communist Party’s role is both obvious and rather difficult to explain. It is in charge, but how exactly it is in charge, and how exactly it exercises its leadership, are not well understood by outsiders. It is difficult to draw an organization chart that includes both the Party and government bodies and clearly explain the relationship between them (the official organization charts you do find usually keep the Party and the government separate). If we want to understand what is changing about Party leadership in China now, we need to start from how it functioned before.

The best short explanation of the Party’s role in China that I have found recently is from Frank Pieke’s Knowing China: A Twenty-First Century Guide (a book I have previously praised):

The CCP is not an electoral machine or vehicle of competition with other political parties. It is also not a platform for political cooperation and competition between like-minded people. The Party is not even an institution, as commonly understood, but only exists in symbiosis with other institutions: the organs of the state, representative government, judiciary and the army, service organizations (hospitals, schools), enterprises, mass organizations, collectives, non-governmental organizations and even other political parties. This symbiosis is always unequal. The CCP acts as the superego of society that guides, inspires, evaluates, coordinates, directs and decides; other institutions will have to follow. …

The Communist Party does not govern. Instead, it leads, controls and inspires all institutions of government and governance. The Party’s continued control over the people who lead and administer the institutions of governance continues to be the most vital feature of China’s uniquely socialist mode of governance. Known as cadres in China and other socialist societies, these people should not be thought of simply as bureaucrats or, alternatively, politicians, officials or managers: the concept of cadre includes all of these. … The recruitment, training and deployment of cadres are the most important ways in which the Party inserts itself directly into all institutions of state and society and guides and directs the project of socialist transformation.

Pieke’s description is I think very accurate, and captures the reality that the Party and the government are parallel and closely intertwined organizations. The Party’s key roles are to set ideological direction and to control the appointment of personnel to governing institutions, rather than to govern directly. But Pieke may have captured the essence of the Party role just as it is changing into something else (his book came out in 2016).

I think what Xi is doing is turning the Party into a proper institution, and changing the Party’s role into something you could draw on an organization chart. Rather than have the Party exist in parallel with other institutions, Xi wants to have the Party be clearly in charge of those institutions. In the new organization chart, the Party does not overlap with over bodies, or hide in the background appointing key personnel: it is plainly and obviously on top. The Party is moving from a background role of political inspiration to a foreground role of political decision-making. In a way, this shift just makes more explicit what has always been true: the Party is ultimately in charge (the illustration below is from a 2013 CRS report by Susan Lawrence). 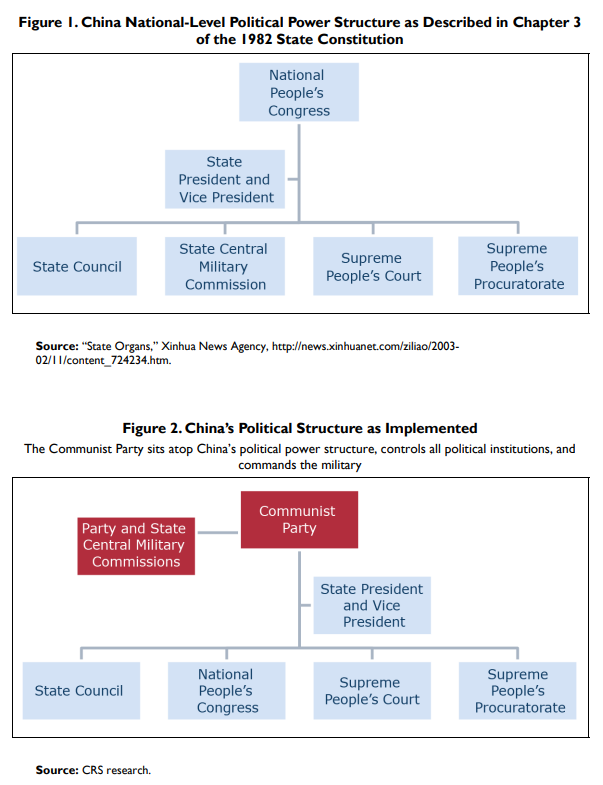 This comes out fairly clearly in the public explanations and defenses of the recent changes, which are not at all shy. A good example is this op-ed by Eric X. Li, possibly the Party’s most effective apologist writing in English:

Since the founding of the People’s Republic in 1949, the leadership of the party has been central to China’s political DNA. However, institutionally the system has gone through significant growing pains. At first, China adopted the Soviet system that separated, at least on the institutional level, the party and government. The top organs — the party central committee, the National People’s Congress and the State Council were parallel. But in reality, the party led everything. …

The party has now stepped forward to the front and center of Chinese governance. … While the party’s leadership has always been politically paramount, the administrative separation of party and government has produced institutional contradictions and confusion. [The new arrangement] lifts the veil of pretense that, somehow, the party and state governance are not one, which is untrue and wholly unnecessary and counterproductive at this stage of China’s development.

The tendency of the Western media has been to conflate the trend toward the strengthening of the Party’s role with Xi Jinping’s grabbing power for himself. So all these developments are made to serve one undifferentiated narrative of China becoming more authoritarian.

But there is also clearly a sense in which what Xi is doing is fundamentally rationalization: he is taking a confusing structure inherited from history, and redrafting it in a more straightforward way. If the Communist Party is ruling China, which no one has ever doubted, then why should its rule be indirect and its role hidden? If you were going to have an authoritarian developmental state, would you really have arranged things this way? Wouldn’t it just be simpler to have an organization chart where all the lines meet at the top?

Much of the writing about recent political changes emphasizes how Xi is breaking with “norms” and upending established practices. But it would be wrong to see Xi as some kind of interloper who is recklessly destroying carefully balanced institutional arrangements with a long history. (This recent piece by Francesco Sisci captures well how the political institutions of the past were unstable compromises set up to address issues of the moment.) Xi is a believer in China’s system, and he takes its logic seriously. He is not overthrowing the fundamental principles of Chinese politics, but trying to apply them more systematically.