Tiff Roberts over at Bloomberg Businessweek gave a nice write-up of a recent piece I did looking at how the impact of lower energy prices on China differs depending on where you are in China.This provides an excuse for me to reproduce one of my favorite maps for a wider audience: 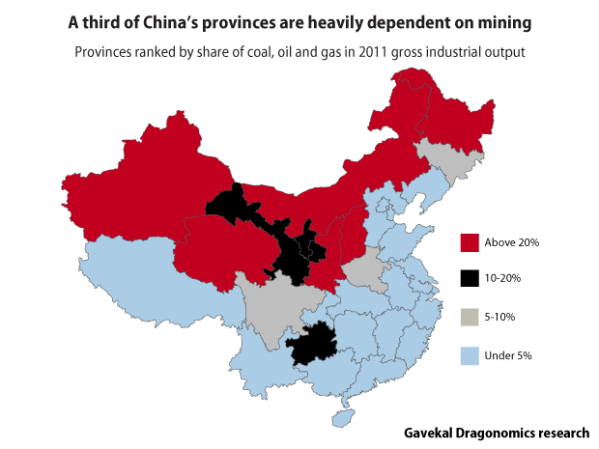 While we stereotypically think of China as a huge consumer of energy and commodities, it is in fact also a big producer of same (one way in which China resembles the US).  Within China, this is essentially a regional phenomenon: the center, south and east are mainly resource consumers (and are inhabited mainly by ethnic Han Chinese). The northern and western provinces are where all the resources are produced (and where ethnic minority populations are larger).

One of the interesting things I learned from this map is that in economic structure terms Heilongjiang and Xinjiang are not that different, even though conventional geography and economic analysis never puts them together. Xinjiang is usually considered an exception to everything in “core China”, because it is so clearly a frontier territory, with different ethnic and economic dynamics (same goes for Tibet). Heilongjiang by contrast is uncomplicatedly part of “core China”. But in fact both have local economies with a high degree of resource dependence. And in historical terms it was not all that long ago that Heilongjiang was not part of “core China”: it is one of the three modern provinces covering the territory of Manchuria, which in the 19th century was an ethnic enclave for China’s Manchu rulers, then a booming frontier region when migration was opened up to Han, then a de-facto colony of Japan. Heilongjiang is obviously much more integrated now but I wonder if its earlier history offers any parallels to some of the dynamics we’re seeing in Xinjiang today