Here is an interesting tidbit from Branko Milanovic’s latest book, Global Inequality: A New Approach for the Age of Globalization. Much of the book is about the recent, unusual combination of a trend for inequality to rise within countries (as the upper classes take a larger share of each nation’s income) and a trend for inequality between countries to fall (as rising incomes in developing countries narrow the gap between the haves and have-nots on a global basis). China has been the main driver of the latter dynamic, but we may already be at a turning point in that trend–one that will require India to keep growing if global inequality is to keep falling:

Population-weighted intercountry inequality has been uniformly decreasing since the late 1970s, since about the time when China introduced the “[household] responsibility system” (de facto private ownership of land) in rural areas and growth picked up. Moreover, convergence (the decrease in intercountry, population-weighted Gini values) has been remarkable and has accelerated in the first decade of the twenty-first century. We have already seen that this movement was the key factor behind the decrease in global inequality and the broadening of the global middle class. …

China’s role as the main engine driving the reduction in global inequality becomes less important as the country gets richer. In 2011, China’s mean per capita income, calculated from household surveys and expressed in international dollars, was 22 percent below the global mean and was greater than the mean incomes of 49 percent of the people in the world (assumed to have the mean incomes of their countries).

The world will very soon be in the position where China’s high growth rate begins to add to global inequality, not detract from it. India’s mean income is currently ahead of only 7 percent of the world population, and India cannot be expected to “turn the corner,” that is, to become, in average per capita terms, richer than more than 50 percent of the world population, in the next twenty years. Thus it will, if it grows fast, take over from China as the main engine of global income equalization.

The technicalities are interesting and worth citing in full: 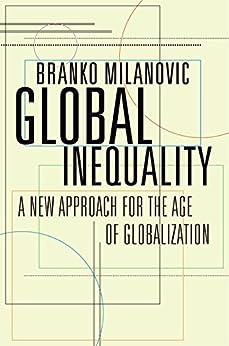