One of the more interesting aspects of the current redrawing of the Chinese government’s organization chart on is the combination of Communist Party and state institutions. For instance, the government agencies regulating print and broadcast media are being folded into the Party’s Department of Propaganda, while agencies for religious and ethnic affairs are being absorbed by the Party’s United Front Work Department (historically, the agency in charge of making strategic alliances with non-Party elements in society).

The move that perhaps most symbolically captures what is going on is the merger of the Central Party School (mainly a venue for mid-career training of Party cadres) and the National School of Administration (for civil servants) into a single organization called the Central Party School (National School of Administration). Who gets to be outside the parenthesis and who has to be inside the parenthesis tells you what is going on. (The People’s Daily has a helpful Chinese-language infographic that summarizes the changes.) I’m going to call these combinations of party and state organizations “hybrid institutions,” stealing the term from Timothy Snyder, who used it in a somewhat different context. 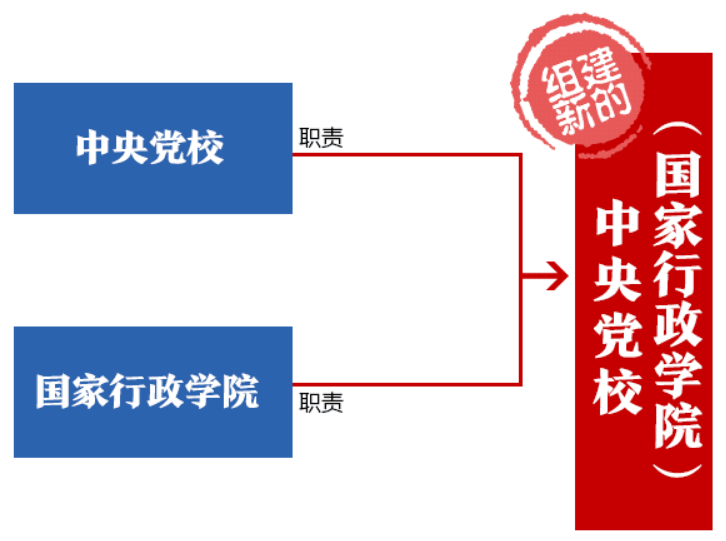 In the recent post in which I tried to pull together my thoughts on the Party-state restructuring, I generally argued that the changes aim at making explicit what has always been true: that the Communist Party is in charge of the country. But it would also be wrong right to imply that these changes were somehow inevitable and widely expected. They very much were not.

One reason why is that the general drift of organizational changes in China had for a while been in the opposite direction: they de-emphasized the Party in favor of the government. I recently came across an excellent example of this in Barry Naughton’s 2003 account of the creation of SASAC, the agency supervising the large state-owned enterprises controlled by the central government. Before its creation, such supervision had been done by a secretive Party body known as the Central Enterprise Work Group. So at the time, SASAC was also a kind of hybrid institutions, as it absorbed and replaced this Party body:

The composition of the SASAC must represent a balancing act between Chinese Communist Party and State Council interests, just as the Central Enterprise Work Group before it represented such a compromise. Indeed, we find ample evidence that this expectation holds true. The SASAC has eight full commission members. It is possible to identify four as coming primarily from the State Council system and four as coming primarily from the Chinese Communist Party system.

Interestingly, the head of the SASAC, Li Rongrong, is not the party secretary of this body. Instead, this job is held by Li Yizhong, who is first vice chairman of the SASAC. But the SASAC web site is unusually specific about the responsibilities and duties of commission members. It specifically says that Li Rongrong is the boss: he “assumes the main responsibility of SASAC and he is the first person of responsibility in SASAC. He will take charge of the SASAC party committee’s work when Mr. Li Yizhong is out of Beijing for business.” Li Yizhong, in turn, takes over the main responsibility when Li Rongrong is out of town. Thus, the web site in effect says, “even though Li Rongrong isn’t the party secretary, he’s still the boss.” It is stretching things only a little to say that the SASAC is a joint venture of the State Council and the Chinese Communist Party, with the State Council having 50 percent plus one share.