The new IMF working paper on industrial policy, by Reda Cherif and Fuad Hasanov, has gotten a lot of notice, and indeed it is very clear, comprehensive, and useful. But for anyone who has already done some reading on the history of successful Asian economies, particularly Taiwan and South Korea, it is not exactly surprising stuff. Here for instance is their quick summary of the key characteristics of these economies’ successful industrial policies:

The combination of a focus on exports with tough competition sounds a lot like what Joe Studwell, in his 2013 book How Asia Works (which is not cited in the IMF paper’s bibliography), called “export discipline.” His explanation is clearer and punchier:

Governments in all the major economies of east Asia tried at some stage to nurture domestic manufacturers. That those in north-east Asia succeeded, while those in south-east Asia failed miserably, turned on a small number of policy differences. By far the most important of these was the presence – or absence – of what I call ‘export discipline’.

This term refers to a policy of continually testing and benchmarking domestic manufacturers that are given subsidies and market protection by forcing them to export their goods and hence face global competition. It is their level of exports that reveals whether they merit state support or not. …

Where export discipline has not been present, development policy has become a game of charades, with local firms able to pretend that they have been achieving world-class standards without having to prove it in the global market place. In south-east Asia, the energies of entrepreneurs were directed towards fooling politicians rather than exporting.

I would still recommend Chapter 2 of How Asia Works as the definitive comparison of successful and unsuccessful industrial policies in Asia.

Even within Asia this lesson is not as widely appreciated as it perhaps could be. For instance, former Chinese finance minister Lou Jiwei recently made a surprisingly harsh public criticism of Made In China 2025 (for which he has apparently been forced into early retirement). He called it a waste of taxpayers’ money and an unwarranted intrusion of government: “those industries are not predictable and the government should not have thought it had the ability to predict what is not foreseeable.”

While I have a lot of respect for Lou, I’m not sure this is the strongest criticism of Made in China 2025. It’s not clear that “the market” would necessarily pick different industries as being desirable to invest in now: the ideas that people have about what technologies are going to be important in the future don’t seem to be that different across the public and private sectors. The Chinese government have have a plan to promote artificial intelligence, but private venture capital firms are also throwing plenty of money at that sector as well. Semiconductors are one of the key sectors targeted by The Made In China 2025, and I don’t think many people are seriously arguing that semiconductors won’t be important in the future.

This is not to say that venture capital investors are necessarily going to be right about the future either, just that both government officials and venture investors can read the same things and are influenced by the same conventional wisdom. This point is not original to me: I picked it up from Brad DeLong’s 2010 book with Stephen Cohen, The End of Influence:

Americans like to say scornfully that industrial policy is about “governments picking winners.” Picking winner industries is not that hard—even for governments. Most countries trying to climb the ladder of quality and industrial sophistication through selective promotion compiled pretty much the same lists at the same time. Even at the leading edge of the technological frontier, the industries that governments are tempted to promote are largely the same ones picked by the analysts and brokers at investment firms such as Merrill Lynch, Nomura, or Rothschild’s.  …

Picking “winner industries” is not the hard part; winning is. It is difficult to create actual winners, companies that develop into successful competitors.

And that, of course, is where export discipline comes in. 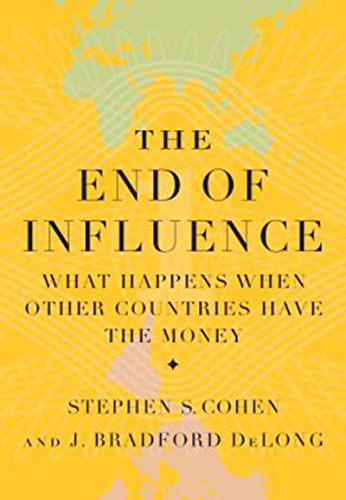